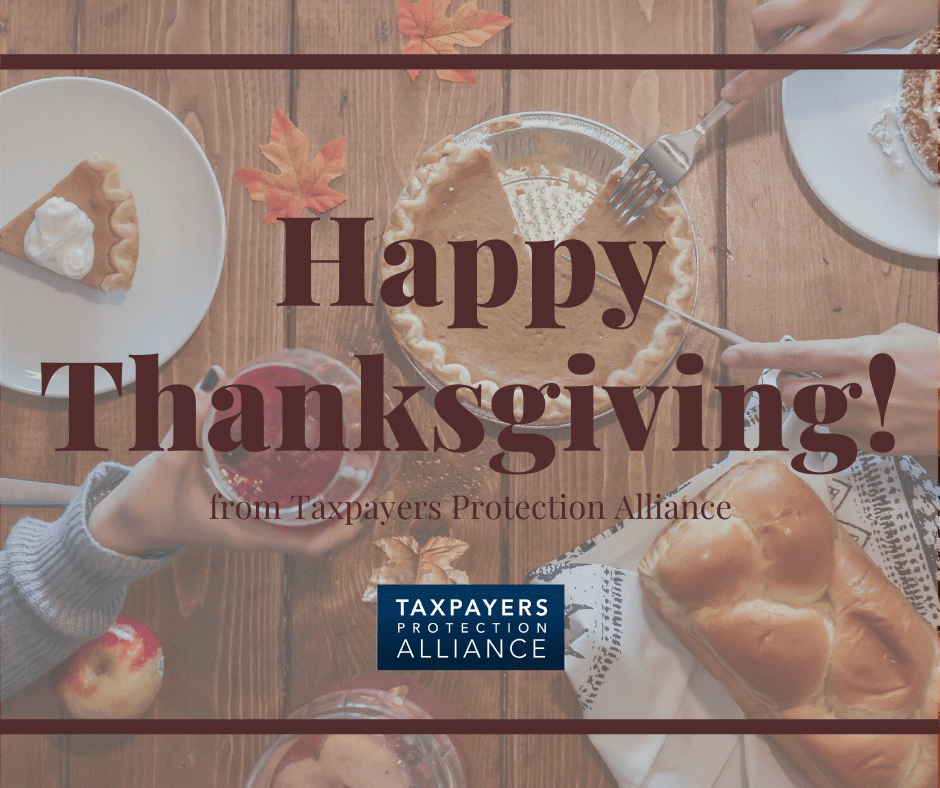 As Turkey Day quickly approaches, millions of Americans across the country will (or should) be reflecting on the many things they are thankful for. While the team at the Taxpayers Protection Alliance (TPA) had a great deal of difficulty stuffing all of our good fortune into a short blog post, we gave it our best shot. Enjoy our first annual TPA Giving of Thanks, with a small sliver of policy analysis on the side.

Since the start of 2017, taxpayers and consumers across the country have been served a generous helping of (FCC Chairman Ajit) Pai, as the agency leader streamlines rules and ensures greater internet access for all Americans. Under his leadership, the number of Americans without access to reliable, high-speed internet access has declined from 26 million to 19 million. The arrival of 5G wireless internet will further expand the digital domain, and the FCC’s recent steps ensure that providers will have enough spectrum to deliver lightning-fast internet throughout the country and bridge the “digital divide” in rural areas. On November 18, Chairman Pai announced that the FCC will make the “C-band” of spectrum available via public auction and rejected a deeply-misguided proposal to allow a handful of satellite operators to conduct a secretive sale of the bandwidth behind closed doors. Allowing for the transparent, competitive approach is critical, since C-band spectrum is uniquely capable of carrying large amounts of spectrum over long distances. Filling out the cornucopia of thanks, Pai also threw his support behind a nationwide suicide hotline number (988) and committed to opening up a significant portion of the 5.9 GHz band of radio spectrum for unlicensed Wi-Fi use.TPA is grateful to Chairman Pai for committing to reforms across the board, and cutting a large slice of spectrum for 5G.

While the FCC was deliberating on the all-important C-band issue, Sen. John Kennedy of Louisiana was in the trenches fighting for a public, competitive auction of taxpayer-owned spectrum. In his capacity as Chairman of the Senate Subcommittee on Financial Services and General Government, Sen. Kennedy held a hearing on October 17 where he asked Chairman Pai how best to make C-band available for 5G wireless internet access. The lawmaker then listened to the testimonies of TPA President David Williams and Citizens Against Government Waste (CAGW) President Tom Schatz about the ramifications of a public auction of spectrum versus a deeply-flawed “private sale.” Thanks in large part due to this hearing, along with multiple meetings with President Trump, Sen. Kennedy was able to convince the administration and FCC to stand up for taxpayers and consumers and move ahead with a public auction. Considering the lone crusade of this brave member of Congress, Sen. Kennedy has now usurped Popeye’s claim to be “Louisiana Best.”

On Thanksgiving, Americans enjoy a one-day reprieve from the mail and the myriad bills that come through the Post Office. But the very next day, thousands of Americans will get a surprise medical bill in the mail from a healthcare provider (assuming, of course, USPS hasn’t lost their mail!). The scourge of “surprise billing” impacts millions of Americans each year, as payment disputes between insurers, hospitals, and doctors unfortunately wind up becoming the patient’s problem. This is nothing new, but the problem has gotten worse since the implementation of Obamacare (aka the Affordable Care Act) in 2011. As a direct result of the introduction of a slew of burdensome overregulation, mandates, and price-fixing measures, insurance networks grew significantly narrower and insurers proved increasingly unwilling to satisfactorily reimburse providers. It’s important to fix this problem in a way that protects patients and ensures access to high quality healthcare, but lawmakers such as Sens. Lamar Alexander (R-Tenn.) and Pat Murray (D-Wash.) want to impose even more price-fixing to “solve” surprise billing, even though heavy-handed federal policies were responsible in the first place, and these so-called “solutions” will only make the problem worse. Fortunately, Sen. Cassidy has proposed an alternative, market-based approach called “arbitration,” where insurers and doctors submit competing claims to an online portal where they are independently accessed, and patients need only pay the median in-network rate. This approach has worked wonders in New York State, where out-of-network rates declined by nearly35 percent since the introduction of arbitration. So, for fighting for Americans in need of fair and affordable healthcare, we’re thankful for Sen. Cassidy and all the proponents of arbitration.

Everything is bigger in Texas, including the trifles of turkey and sky-high stuffing on the plates of Lone Star residents. But until recently, some taxes were also bigger in the otherwise small-government state. Until this year, telecom providers laying cable and phone lines through city-owned property had to pay a tax on both lines, even though they were economizing their use of government property. That all changed when a bill introduced by state Sen. Kelly Hancock (R-North Richland Hills) and state Rep. Dade Phelan (R-Beaumont) slashed taxes by requiring that providers only pay the higher of the two fees and no longer get double-charged. TPA was proud to testify at the Texas State House in favor of this underreported tax cut, along with many other free-market groups. We’re thankful that the cut passed into law, and millions of Texas residents can now enjoy lower cable and phone bills. Consumers aren’t out of the woods yet, as nearly fifty Texas cities take their case to court to regain lost taxpayer monies. But rest easy this Thanksgiving, because TPA will continue to fight for low taxes in Texas and everywhere across the country.

On behalf of TPA, have a happy and healthy Thanksgiving!