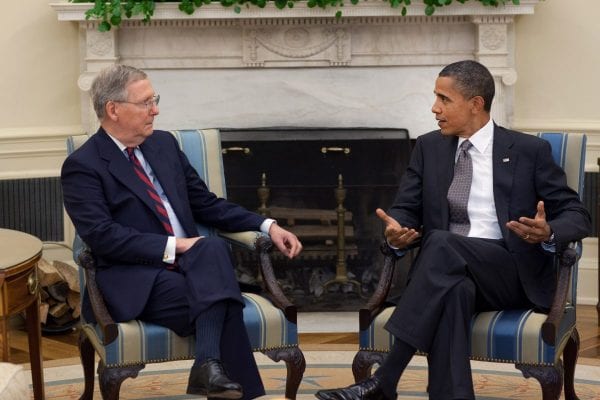 Telecom and Technology Offer Hopes for Positive Congressional Reform in 2015

On Tuesday night, President Barack Obama will give his sixth State of the Union Address and there is no doubt that the speech will contain familiar themes on policy initiatives his administration has long championed. Perhaps chief among them though is telecommunications policy, an area that Congress and the president must address if the country is to remain competitive around the world.

For starters, it has been almost 20 years since the Communications Act has been updated. Coincidentally, the last time the Act was updated, there was a Democrat in the White House and a GOP-controlled Congress. Much has changed technologically in the last two decades, and with the massive change in virtually every facet of telecommunications, it is crucial to make sure that innovation can still be a key ingredient.

In 2014, progress was made, but policymakers must continue the work of House Energy and Commerce Committee leaders Fred Upton, R-Mich., and Greg Walden, R-Ore., to modernize the aging Communications Act and key areas like spectrum policy. Spectrum and the allocation of the spectrum government owns has become a key policy debate and the results of how spectrum is auctioned off (including auctions to be held in the coming year) could have a massive impact on taxpayers, as well as consumers and businesses in the wireless industry.

The 1996 update included bipartisan reforms that ultimately spurred many of the technologies we now use every day. The 114th Congress must renew that effort by updating the Act to provide the regulatory certainty necessary to encourage continued investments in advanced communications networks. Those investments could lead to new technological breakthroughs, job creation and economic growth.

An issue that may not be as easy to resolve is net neutrality, as both parties have staked out their ground in this debate. The Obama administration is looking to enact new rules for the internet and urging the Federal Communications Commission to take the lead. The goal of net neutrality advocates to is to reclassify the Internet as a utility under Title II of the Telecom Act. But new regulations would be a terrible idea and would mean a slew of new taxes for Americans.

The president and the FCC must not bypass a Congress attempting to tackle the issue in moving forward with new net neutrality rules. Congress needs to ensure that the proper due diligence is taken to ensure there is no government takeover of the Internet.

Separately, Obama recently addressed the need to increase access to high-speed Internet across the country in a speech in Iowa. The president is right about increasing access, but he is wrong about how to make that happen. The private sector needs to be the driving force behind this access, not the government (read: taxpayers).

Five high-profile municipal broadband networks have had high profile failures in recent years, including one in Provo, Utah, which was sold to Google for $1, though taxpayers will continue to pay off the construction costs for another twelve years. Another, in Burlington, Vt., was sold to a private company for $6 million, not even coming close the $51 million cost of the network. And the debt racked up by a third network in Salisbury, N.C., was the reason Moody’s downgraded the entire city’s bond rating.

These examples should act as a warning to bureaucrats and a wakeup call to states that government broadband doesn’t solve the problems of price and access. In an effort to stop the FCC from overreaching, some states are already taking matters into their own hands by passing laws that make it impossible, or more difficult, for cities and towns to build broadband networks. This may not be enough because FCC Chairman Tom Wheeler is determined to expand government broadband, even if states don’t agree. Congress should do their part to ensure the FCC stays within the scope of its authority but also encourage the FCC to let the private sector continue to be the drivers in the expansion and innovation of broadband service.

In sum, Congress and the president need to recognize that it is the private sector that will continue to drive the telecom economic engine. Excessive regulations and misguided policy will only hurt innovation and investment. 2015 should be a big year.