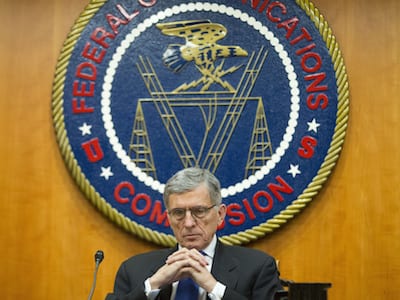 Earlier this month, Federal Communications Commission (FCC) Chairman Tom Wheeler released an updated version of his “set-top box” proposal, which continues to rely on misguided policy and questionable authority. The Taxpayers Protection Alliance (TPA) slammed the new proposal noting the widespread opposition and unprecedented amount of power the plan would give to the FCC.  Now, as the FCC prepares to meet and vote to approve the new plan this week, taxpayers and consumers should continue to voice their opposition to the unnecessary new mandate.

Chairman Wheeler reworked his plan because the original proposal, which would have required traditional pay-for-TV providers to make video programming available to third-party devices, failed miserably on the merits. Support was scarce from the creative community and even members of the commission who normally agree with Wheeler had reservations. The proposal was so troublesome that the Copyright Office expressed deep concerns about the deleterious effects it would have on intellectual property.

On September 8, Chairman Wheeler laid out a new approach that focused on using “compulsory licensing” as a way to phase out the set-top box.  Compulsory licensing is when “a government allows someone else to produce the patented product or process without the consent of the patent owner.” Compulsory licensing is problematic because Chairman Wheeler wants to place the FCC in charge of licensing and distributing creative works. That kind of power over content and copyright has never been a part of the FCC’s authority.  And, the fact that the Chairman is shifting the plan so that the agency can garner more power should concern all stakeholders. Chairman Wheeler’s new plan poses a direct threat to the creative community, copyright protection, consumers, and taxpayers.

Given the growing concerns about the new approach, which amount to essentially an FCC takeover of the Copyright Office, there should be loud and united opposition to the plan. TPA urges Chairman Wheeler to back away from his latest approach.   There is no precedent for what the Chairman wants to do and putting it into motion will have immediate and long-term consequences that threaten the integrity of content and distribution in the video marketplace.

Simply put: this latest approach should be scrapped just like the previous one. Chairman Wheeler must recalibrate his efforts to put forth a proposal that will encourage the creative community and incentivize competition.

TPA urges the Chairman and all members of the FCC to present a better approach that respects copyright, incentivizes innovation, and preserves competition. It’s clear that the proposal being voted on Thursday will not achieve any of those core principles.

UPDATE: TPA released this statement after the FCC moved to delay the vote on the “set-top box” proposal.