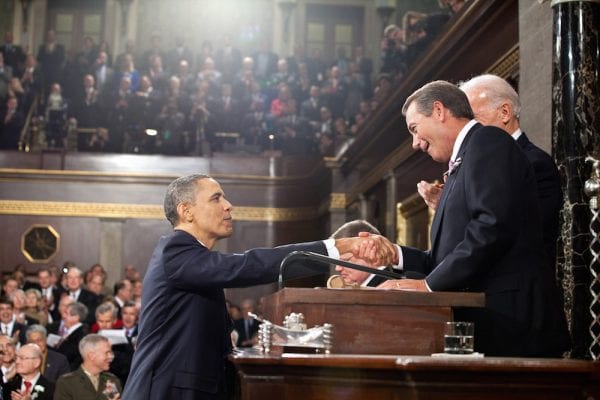 Why This Budget Deal Makes No Sense For Taxpayers

This article originally apeared in The Daily Caller on October 27, 2015

It was announced on Monday night that congressional leaders and the White House have agreed to a two-year budget deal that lifts the budget caps by $80 billion. In addition to lifting the budget caps, the debt ceiling will be suspended until 2017. That’s not a compromise, that’s capitulation.

The budget caps were put in place in 2011 because the country was faced with a debt-ceiling crisis. Sound familiar? The Budget Control Act (BCA) of 2011, which set the caps and ultimately led to sequestration, was Congress and the president admitting they couldn’t be trusted to be fiscally responsible.

The spending caps set forth by the BCA and implemented through sequestration are the first nominal (real) cuts in spending that the federal government has seen in decades.

The latest budget deal busts the caps by $80 billion; $50 billion in fiscal year (FY) 2016 and $30 billion in FY 2017. The increase would be equally divided between defense and non-defense discretionary spending, neither of which need more money.

The Pentagon doesn’t need more money. In fact, before taxpayers are asked to spend more on defense, it is important to figure out how the Pentagon currently spends its money. Right now, the Department of Defense is the only federal agency that hasn’t submitted a full audit as required by law. One would only need to look at the F-35 to understand that the Pentagon has plenty of money but just doesn’t know how to spend it wisely. Adding insult to injury, the Pentagon’s Overseas Contingency Operations (OCO) Account gets a pass in this budget deal, allowing it to continue as a de facto slush fund for getting around the defense spending caps.

The offsets for the budget deal only account for the $80 billion in additional spending. It does nothing to address the current deficit and debt. More needs to be done to address long term deficits and debt, not a short-term band aid that suspends the debt limit and breaks the BCA caps over the next two years. If the budget deal passes and the debt ceiling is suspended until 2017, members of Congress and presidential candidates (from both parties) can avoid discussion about the debt ceiling.

The biggest disappointment in this deal is not House Speaker John Boehner (R-Ohio) or President Obama. Both Boehner and Obama will be long gone after the deal is passed. Those Republicans who will vote for this deal will be the bigger disappointments.  Controlling the House and Senate, Republicans are letting a golden opportunity slip right through their hands. They had a chance to institute long-term fiscal discipline. Instead, they are being bullied by the president and big spending Democrats in Congress.