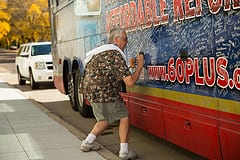 For the past six weeks, the 60+ Association has been traveling on the Health Care Reform:  Let’s Do Better bus tour, which visited Virginia, Pennsylvania, New York, Ohio, Indiana, Illinois, Wisconsin, Minnesota, and Florida.  As one of the policy experts, the Taxpayers Protection Alliance (TPA) has been on the bus for numerous stops including Pennsylvania, Ohio, Indiana, Illinois, and Florida.  Joining us on the trip was comedian Jimmy Labriola (you may remember him from his role as Benny on Home Improvement) and Rick Heil (Grammy nominated Christian rocker).  The goal of the tour was to educate folks on the massive financial costs and the destruction of the doctor-patient relationship brought on by Obamacare.  The crowds at every stop were not only enthusiastic to see us but also concerned about the direction of the country.  After a program of policy speeches and entertainment, people were invited to sign the bus.  Yes, that’s right, the bus was wrapped in a material where folks could sign the bus so the folks at the 60+ Association could take it to Capitol Hill and show members of Congress that Obamacare should be defunded.  Many thanks to all who participated in the journey, but special thanks to 60+ Association Chairman Jim Martin and 60+ Association President Amy Frederick.