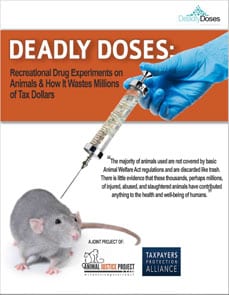 Washington, D.C. – Today, the Taxpayers Protection Alliance (TPA) released a report in cooperation with the Animal Justice Project detailing the disturbing facts about drug experimentation on animals and what the practice is costing taxpayers. The report, Deadly Doses: Recreational Drug Experiments on Animals & How it Wastes Millions of Tax Dollars, examines animal drug testing programs that are being bankrolled by the American taxpayer.

While generally providing little value to science or to human health, and harming an untold number of creatures, the studies came at great expense to U.S. taxpayers.  Many of the researchers behind these trials have expansive careers, some spanning decades, in which the same tests are repeated using the same animal model at great expense to taxpayers. Other than the prospect of publishing papers with their findings, it is difficult to understand any reason why researchers would want to engage in the scientifically dubious practice of employing animal testing to study the impact of recreational drugs on humans.

Studies that involve LSD, cocaine, ecstasy, other recreational drugs and what amounts to animal torture are being funded by the American taxpayer to uncover the secrets of the blink-rate of rabbits, the decision-making skills of monkeys, and other nonsensical research priorities.

TPA President David Williams blasted the wasteful spending revealed in the report, and called out the Department of Health and Human Services (HHS) and the National Institutes of Health (NIH) for the outrageous waste of taxpayer money on these studies.

“This report shows just some of the many outrageous projects being funded by the government at the expense of the American taxpayer. This research needs to be exposed so this kind of wasteful spending is stopped,” Williams said. “What we need from HHS and NIH is more common sense about how to allocate taxpayer money, and fewer mindless studies that perpetuate a culture in Washington that feels the need to spend taxpayer money on anything and everything.”

A representative from the Animal Justice Project USA condemned the research.

“These experiments are cruel and unnecessary,” said Julia Orr from the Animal Justice Project USA. “This is a gross waste of money and needs to stop. It is unconscionable that we are inflicting such cruelty on animals in the name of science when it is clearly not advancing medicine. This abuse has to end.”

The report in its entirety can be found here.