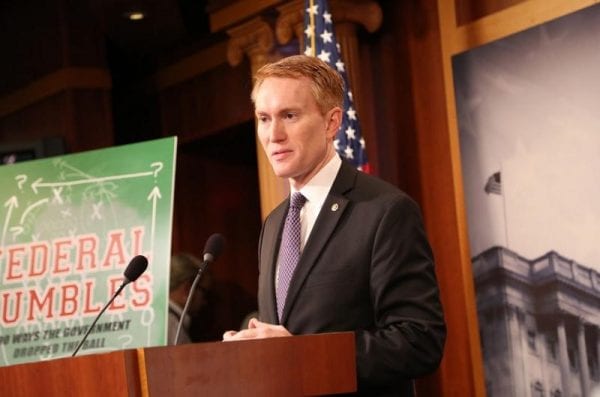 Before Sen. Tom Coburn (R-Okla.) retired, he was known for being a taxpayer watchdog and his government waste report.  Sen. Coburn would hold a press conference and shame government agencies and bureaucrats for the massive amounts of waste they perpetrated at the expense of taxpayers. This is one Washington tradition that should be carried on forever.  Fortunately, Sen. Coburn’s successor, Sen. James Lankford (R-Okla.), released his own report spotlighting excessive and wasteful spending as well as regulatory overreach from federal agencies. The report, entitled “Federal Fumbles: 100 ways the government dropped the ball,” details billions of dollars in spending and regulations that range from the idiotic to absolute bizarre.

With more than $100 billion in waste and $800 billion in needless regulations, there are plenty of ridiculous examples that fill Sen. Lankford’s report. Here are some of the most egregious ones:

In a show of respect for his predecessor, Mr. Lankford stressed that Coburn was irreplaceable and this wasn’t about tradition but more about providing a pathway on how to get to a more responsible government. Lankford spoke at a press conference Monday making very clear exactly why he was releasing the report.  And, according to Politico:

“This is our to-do list,” Lankford said of the document. “People want their government to be efficient. That’s a reasonable thing to do. This is not a matter of cutting, this is identifying things that are not federal priorities or finding things that should be done better by a state or things that would be wasteful.”

The Taxpayers Protection Alliance (TPA) is encouraged to see Sen. Lankford stake out his own claim to be the voice for speaking out against government waste. Sen. Coburn’s “Wastebook” was a useful tool and it was welcome information, but with the former Senator’s annual reports and consistent fighting on behalf of taxpayers against government waste now part of the past, there’s room for more Senators to step up and do their part in order to protect taxpayers and expose excessive waste. Sen. Lankford’s report is a great way to start a new chapter in the fight against government waste in Congress.  And, the next time a member of Congress or bureaucrat says that there is no waste to cut, show them Sen. Lankford’s report.