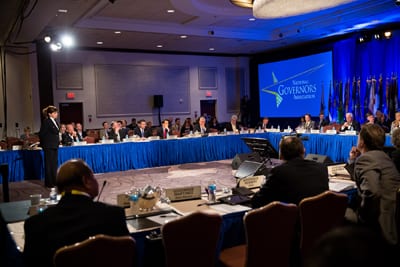 Stephen Adkins is a research fellow at the Taxpayers Protection Alliance. Which governors do best at protecting taxpayers’ money and controlling state spending? That’s the questions answered by the Cato Institute’s 12th biennial “Fiscal Policy Report Card on America’s Governors.”

Residents of North Carolina, Kansas, Maine, and Indiana are in good hands, according to the report card.

The study finds that, while some state executives responded to widespread upticks in state revenues by lowering tax burdens on their constituents, others, predictably, have decided to go on spending sprees.

California Governor Jerry Brown, for example, “proposed spending increases averaging 6.8 percent annually over the last three years, according to the report.” Further, the Golden State Democrat “has pushed for numerous large tax increases. In 2012 he championed a plan to increase annual tax revenues by $6 billion a year.”

Over the next decade, Obamacare-related Medicaid expansion projects to cost the federal government $792 billion and state governments an average of $46 billion. Governors who opted into the program have accepted the devil’s deal of “free” short-term federal money, while mortgaging budgetary sanity in the long-term.

While Governor Brown was a black hole for tax dollars, Pat McCrory of North Carolina and Kansas’ Sam Brownback were shining lights. The two Republicans tied with the highest score on the report card. They scored a 78 based on statistics provided by the National Association of State Budget Officers, the National Conference of State Legislatures, the Tax Foundation and other sources from January 2012 to August 2014. Mr. Brown scored a 19, while Colorado’s John Hickenlooper and Deval Patrick of Massachusetts earned scores of just 26 and 29.

Maine Governor Paul LePage and Indiana’s Mike Pence joined Mr. McCrory and Mr. Brownback as the only governors who got “A”s on their report cards.

According to Cato, these four grade-A governors implemented the largest tax and spending cuts over the past two years.

These governors understand that lowering tax rates and decreasing government spending is better for everyone. As the report put it, “To help spur growth, some governors are pursuing reforms to make their states more attractive for job creation and investment. A good way to do that is to cut individual and business tax rates to make them more competitive with rates in other jurisdictions.”

Kansas Governor Sam Brownback, for example, has been a staunch supporter of tax reform since taking office in 2011. In 2012, he signed into law tax cuts that have simplified and lowered Kansans’ tax burden substantially, and has set into motion further reductions and simplifications in the state tax code to come over the next several years. These measures will save Kansas households over $800 million on their tax bill per year.

But it isn’t just all about the taxes. The report also grades how tightly governors have held onto the state purse strings. Take Ohio’s governor, Republican John Kasich. While he had favorable marks in the taxation department, his massive 13.6 percent spending increase – over 4 times the national average of 3.1 percent – dragged his grade down to a “D.” He tied Michigan’s Rick Snyder as the worst-scoring GOP governors.

Overall, party affiliation matter when it comes to how governors tax state residents and spend their money. Of the best-scoring governors, 12 of the top-13 were Republicans. The only Democrat to earn a “B” was Earl Ray Tomblin, West Virginia’s governor.

The 12 lowest-scoring governors were all Democrats.

Like death and taxes, it’s a foregone conclusion that some Governors will always try to spend their way to prosperity. There are others, thankfully, who have chosen sanity. Their constituents are in a tidier situation for it.

As Mr. LePage put it: “Big, expensive welfare programs riddled with fraud and abuse threaten our future. Too many Mainers are dependent on government handouts. Government dependency has not – and never will – create prosperity.” That’s a lesson all governors should take to heart if they expect to score well on the next Cato report card, or hope to bring jobs and economic growth to their states.