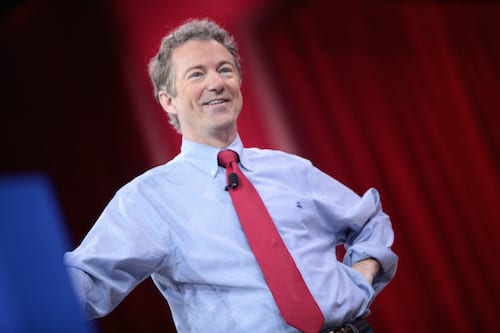 This article appeared in Rare on November 16, 2015

After the previous three Republican presidential debates devolved into a series of spectacles marked by petty infighting and general disorder, the most recent one in Milwaukee, Wisconsin was marketed as the first real opportunity for substantive discussion.

One exchange, in particular, did highlight an incredibly important topic for conservatives: Congress’ addiction to blindly giving the Pentagon as much money as it wants.

In an exchange with Senator Marco Rubio, Senator Rand Paul asked whether Rubio, and by extension other Republicans, could be true conservatives promising “to make the country safe” while supporting unlimited military spending that contributes to the national debt.

The short answer is no, they can’t.

The Pentagon is the single largest federal agency and currently accounts for more than half of federal discretionary spending to the tune of $600 billion every year. Many Republicans have argued that throwing even more money at the Pentagon is necessary to provide security and ensure our collective safety. The questions are whether more defense means better defense, and what the appropriate amount of money to fully fund our defense is.

Surprisingly, no one actually knows the answer to this question. Despite it being mandated by law since 1995, the Pentagon has never submitted to a complete financial audit. The Defense Department cannot provide a full accounting of how it’s spending the taxpayer dollars it currently receives. And yet defense hawks like Rubio and most of the GOP presidential field insist on giving the Pentagon a larger slice of the pie.

Although this behavior is fiscally irresponsible in and of itself, it’s even more reckless considering that without an audit, the Pentagon has already been exposed for ridiculously wasteful spending. From the $43 million gas station in Afghanistan to the infamous $600 toilet seat to Pentagon officials using government credit cards on escorts and gambling, there may be many more billions of dollars being misused and wasted.

The country has accumulated more than $18 trillion in debt because the government spends more money than it brings in as revenue. As Congress moves from one funding crisis to the next, struggling to balance the budget and find places to cut, the Pentagon cannot and should not be immune from scrutiny.

Unlimited military spending not only goes against conservative principles of small government and fiscal responsibility, but also contributes to the very insecurity we are trying to combat. Perhaps the GOP field would be better served by listening to Senator Paul. We can be more secure without breaking the bank.