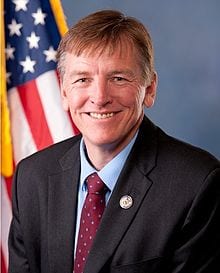 Today, the Taxpayers Protection Alliance (TPA) introduced a new feature to the regular podcast called “Member Spotlight.” This Member Spotlight is the first in a series of podcasts that will showcase a member of Congress who has done extraordinary work for taxpayers.  Our first Member Spotlight features Rep. Paul Gosar who represents Arizona’s 4th District in the United States House of Representatives (click here to listen).  First elected in 2010, Rep. Gosar is a true hero for taxpayers with his tireless work to rein in spending and excessive regulation.  Rep. Gosar is a model of what a fiscally responsible member of Congress should be.

Rep. Gosar has worked on a number of issues that have been beneficial to taxpayers. One of the first issues addressed was about the national debt, which has now surpassed $19 trillion. Rep. Gosar pointed out that on its current trajectory, the value of the national debt is likely to bypass the entire United States economy in just a few years.  He also noted that three entitlement programs account for almost half of all government spending. The discussion then focused on issues that matter to taxpayers in Arizona and all across the United States. Rep. Gosar also highlighted legislation he was working on that dealt with new regulations and the appropriations process.

Here are some of the other issues we discussed and the work that Rep. Gosar has done for taxpayers:

TPA has been a staunch critic of the tens of billions of dollars in subsidies that the solar industry has received over the last several years. A better planet for future generations is something everyone can agree on, but that doesn’t mean taxpayers should prop up failing technologies and terrible business models. Rep. Gosar has worked in bipartisan manner to investigate solar sales tactics in order to make sure that taxpayers and consumers are getting all the accurate information they need in order to make the best informed decision on what kinds of products and services will best fill their energy needs.

The Environmental Protection Agency (EPA) is one of the most destructive agencies today. The constant number of regulations the EPA forces onto the private sector has been one of the biggest impediments to getting the economy back on track in recent years. Rep. Gosar has called attention to the destructive policies the EPA has been responsible for and has worked to halt many of the EPA’s job-killing regulations.

The work that Rep. Gosar has done on the Internal Revenue Service (IRS) is some of his most important work on behalf of taxpayers. The IRS has been derelict in their duty by selectively targeting groups based on political ideology and not being able to keep sensitive taxpayer information both safe and secure. Rep. Gosar has continually shined a spotlight on these problems with the agency and has fought to ensure that the operating budget was brought under control in light of all the scandals.

TPA is grateful for the work done by Rep. Gosar and as he continues to fight for taxpayers in Arizona and across the country, it is important that he and other members like him are recognized for their efforts.

The full discussion with Rep. Gosar can be found here. To subscribe to the TPA podcast, click here.