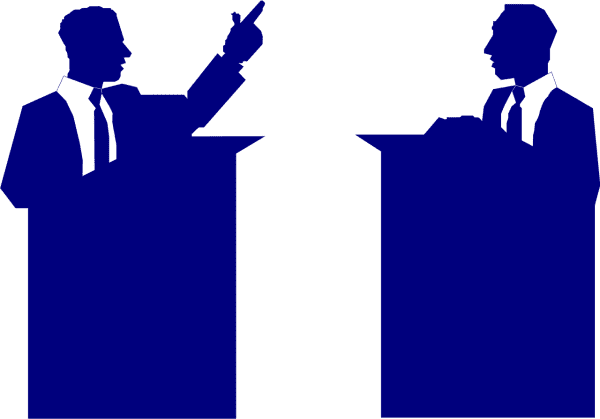 Here we go again.  Another election season is quickly approaching and the first sign of the 2016 election is the first debate.  On Thursday August 6, ten republicans will square off in the first of many debates in an attempt to win the hearts and minds of republican voters.  Thursday’s debate in Ohio will be the first (and certainly not the last time) for the presidential hopefuls to tell the voters why they should be the party’s nominee for President.  Even though the Taxpayers Protection Alliance (TPA) will not endorse anybody for President, we do have a Top Ten list of issues should be addressed by the candidates.

Spending is where everything begins and ends for TPA.  The debate must include a candid conversation about excessive spending and spending levels. First and foremost, the debate shouldn’t be about which candidate can spend more taxpayer money, but which candidate can reduce spending and use taxpayer money in a more efficient way. There has been disappointing rhetoric on the sequester from many of the declared candidates.  In the absence of automatic spending cuts, the candidates need to address how they will get spending under control without the automatic cuts sequester put into law. They also need to be clear about their position on earmarks because even though Congress technically outlawed earmarks, they continue to show up in spending bills.  For more on the budget, click here.

National security should be a major topic in every debate.  The best way to ensure a strong national defense is to reform Pentagon spending to make sure that no money is wasted.   Whether it is the F-35, the Littoral Combat Ship, the Medium Extended Air Defense System, earmarks, or wasteful spending on bases that will never be used in other countries, Pentagon spending and how to reform it is critical for taxpayers and the security of the country. For more on defense, click here.

April 15th is always a stark reminder of how complicated and confusing the tax structure is for most Americans (this video shows that frustration).  Reforming the tax structure for individuals and corporations in the United States is the key to boosting the economy and protecting taxpayers. Some of the 2016 candidates have been forthright and released plans of their own, but the rest need to follow suit. Collapsing tax brackets for individuals and lowering the corporate tax rate to 25 percent is just the start of tax reform.  For more on tax reform, click here.   The candidates should also address attempts at international taxation by the United Nations (UN).  The U.N. wants to start at a global tax on tobacco and expand its reach from there.  U.S. taxpayers fund the U.N. and deserve answers why a foreign entity is trying to impose new taxes on the United States.

Corporate welfare is an issue that Republicans and Democrats agree should be eliminated. TPA wants to hear from the candidates about their plans to stop corporate welfare.  In particular, taxpayers want to know whether the candidates will stop the Export-Import (IM) Bank from resurrecting from the dead.  Ex-Im has been the poster child for corporate welfare benefitting big business and putting taxpayers at risk of billions of dollars.  Ex-Im’s authorization ran out on June 30, 2015, and it should not be revived. DISH Network received a $3 billion subsidy from taxpayers through a spectrum auction by the Federal Communications Commission (FCC).   The $3 billion was a discounted rate that DISH received for wireless spectrum after setting up two “small businesses” to qualify for a discount. Not many people are talking about this FCC giveaway, but it is an important issue that affects taxpayers and consumers.

Energy will be an important issue that will be tackled in these debates.  Ever since the $500 million debacle of Solyndra, taxpayers want to know where the candidates stand on solar subsidies. Three reports from Solar Secrets (here, here, and here)  revealed that, the industry is getting tens of billions annually in taxpayer-backed subsidies; the business model is risky and unreliable; and consumers are being played by an industry that hasn’t turned a profit despite all the government money. Presidential contenders must be able to shed some light on their views regarding solar subsidies. For more on solar, click here.

Throughout the course of the Obama administration there has been a massive increase in the regulatory state. This increase has caused a great deal of damage to the economy, as trillions of dollars in compliance and other costs have led to losses in the job market and a stagnant recovery. Two agencies in particular, the Environmental Protection Agency (EPA) and the Food and Drug Administration (FDA), have been aggressively passing regulations that will cost taxpayers billions of dollars, threaten economic growth, and hurt consumers. For example, TPA has been adamantly opposed to the new clean power rules from the EPA and the trans-fat ban and menu labeling rules from the FDA. The 2016 contenders need to outline how they would roll back the regulatory apparatus that has been growing for years. For more on regulations, click here.

Tax reform is critical and the candidates need to make clear where they stand on that issue as noted above. There also needs to be clarity from the candidates in the area of internet taxes. TPA is most concerned regarding internet taxes on two fronts. First, candidates shouldn’t be embracing an online sales tax, what we’ve seen from Washington (i.e. Marketplace Fairness Act) will harm consumers and e-commerce. Second, the candidates should be demanding a permanent moratorium on internet access taxes. Allowing the moratorium to expire (as it is set to do so at the end of September) would be a disaster as millions of Americans would see a tax increase that would almost certainly become permanent. For more on MFA, click here; and for more on internet taxes, click here.

Obamacare continues to be a disaster for the economy and taxpayers.  Most candidates probably support a full or partial repeal. Taxpayers want to hear what the candidates’ prescriptions are on overall healthcare policy and how they would fix the healthcare system. For more on Obamacare, click here.

IP continues to play an important role in boosting economic growth.  With more than 40 million jobs in the United States directly and indirectly attributable to IP, it is important to make sure that anyone running for President understand how serious all stakeholders are about protecting IP rights.  Whether it’s patent trolls or music royalties, IP is an issue where candidates must be clear. For more on IP, click here.