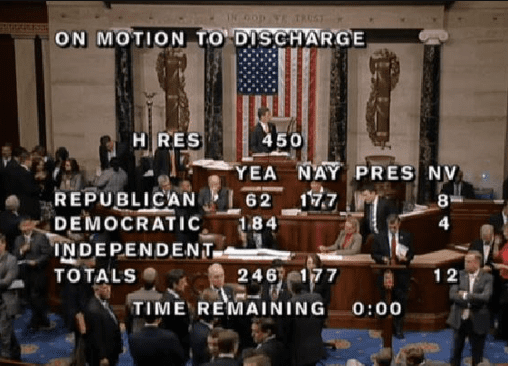 Last night the House of Representatives moved to bring back the Export-Import Bank, a glaring symbol of crony capitalism. The method by which members of Congress did this was a little known parliamentary tool called a discharge petition. A discharge petition is generally used by members of the minority party in order to get legislation onto the floor by subverting the normal committee process.  In fact, the last time it was used was back in 2002. In this case, it was Rep. Stephen Fincher (R-Tenn.) who worked with House Minority Leader Nancy Pelosi (D-Calif.) and Rep. Maxine Waters (D-Calif.) to secure the 218 needed signatures to file the petition to the floor. In the end, 62 GOP members voted (246-177) to bring back the crony bank. Today there will be a vote on Rep. Fincher’s bill, H.R. 597, Reform Exports and Expand the American Economy Act, to reauthorize Ex-Im,  Yesterday, the Taxpayers Protection Alliance (TPA) sent a letter to all members of the House urging them to vote against the Fincher bill and keep the Ex-Im Bank from coming back to “haunt” taxpayers. It is unclear what will happen after today’s vote, and nobody knows for sure what Senate Majority Leader Mitch McConnell (R-Ky.) will do, but TPA will be watching today’s vote and paying careful attention to what happens in the Senate.

The Taxpayers Protection Alliance (TPA), representing millions of taxpayers across the country, urges you to oppose H.R. 597, the Reform Exports and Expand the American Economy Act. This bill, sponsored by Rep. Stephen Fincher (R-Tenn.), would reauthorize the Export-Import (Ex-Im) Bank, reviving an institution that has been the symbol of crony capitalism.

In recent decades, the Ex-Im Bank has ventured far outside of its stated mission, instead distorting the free market, picking the politically connected corporations it chooses to do business with, and leaving many U.S. businesses at a competitive disadvantage. There is even evidence that Ex-Im is not needed considering that nearly 99 percent of all U.S. exports are financed without the bank’s help.

Reviving the Ex-Im Bank would also be costly to taxpayers.  The Congressional Budget Office estimates that the bank is set to cost taxpayers $2 billion over the next ten years.  That $2 billion could go a long way as Congress tries to solve the debt limit crisis and fund other federal priorities.

Reauthorization of Ex-Im has been a contentious issue in the House, and now supporters are using a rarely employed discharge petition to bypass the committee process. Regular order is important and subverting committees of jurisdiction to resurrect a crony institution is not the way Congress should be operating.

TPA urges all members of the House to oppose H.R. 597, and keep the crony Export-Import Bank from coming back.