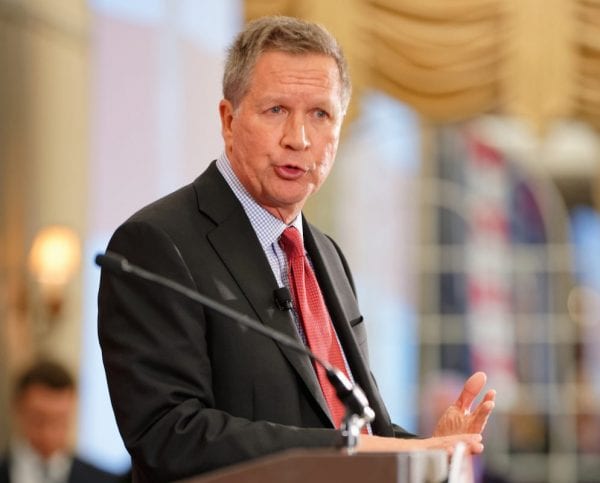 A Taxing Problem for John Kasich in Ohio

John Kasich was a member of Congress that conservatives could trust when it came to fiscal issues.  His co-sponsorship of the Penny/Kasich plan (named after former Democrat Tim Penny from Minnesota and John Kasich), which would have cut spending and eliminated the deficit, showed that he understood spending.  Unfortunately, his recent actions as Governor may be a sign that he may need a refresher course on tax policy.

In February, Gov. Kasich delivered his fiscal year 2016 budget to the Ohio legislature. In the State of the State Address, he described the proposal as “a message to job creators around the state, around the country and around the globe that Ohio is open for business.” Unfortunately, the $5.2 billion increase in sales, commercial activity, and energy and tobacco taxes packaged in the plan is hardly a welcome mat for economic growth.

Not surprisingly, the plan drew immediate and acute criticism. Both sides of the aisle pointed out that not only does it discourage business activity by raising commercial taxes, the goal of providing relief to working class families amounts to little more than a shell game. Shifting tax burdens without adequately addressing spending isn’t a sustainable or effective strategy.  This is a reality that even Ohio Democrats are keenly aware of.

“I am concerned that such cuts will be paid for through regressive tax schemes,” cautioned state Sen. Capri Cafro, “such as an increase in sales taxes that would have a disproportionately negative impact on lower wage earners.”

Republicans were even more direct. “I’m really concerned about the statement that we want to penalize consumption,” said Republican state Rep. Bill Reineke.

Part of Gov. Kasich’s tax plan includes raising taxes on traditional cigarettes and e-cigarettes.  The truth is that these types of tax increases target lower income folks and are abject failures because the revenue never materializes.  And, when the increased taxes don’t raise the projected revenue, elected officials will be tempted to go after revenue (taxpayers) in other ways to make up that lost money. Increases on tobacco taxes also lead to higher black market activity in those states. Most importantly, the idea that increased taxes on tobacco decreases consumption is just wrong.

Gov. Kasich’s plan to increase taxes on companies that use horizontal hydraulic fracturing (i.e. fracking), puts an even heavier burden on the state’s energy producers at a time when depressed prices have already slowed development. Over the past decade, oil and gas production has been one of the few growth sectors of the economy, adding nearly 300,000 jobs between 2005 and 2012. In Gov. Kasich’s backyard the oil and gas industry supports more than 200,000 jobs and more than four percent of the state’s labor income, according to 2012 data. Yet, nearly all of Ohio’s major energy companies announced budget cuts, which higher taxes will only exacerbate further.

Gov. Kasich needs to re-establish his conservative credentials by not succumbing to the temptation of any tax increases.