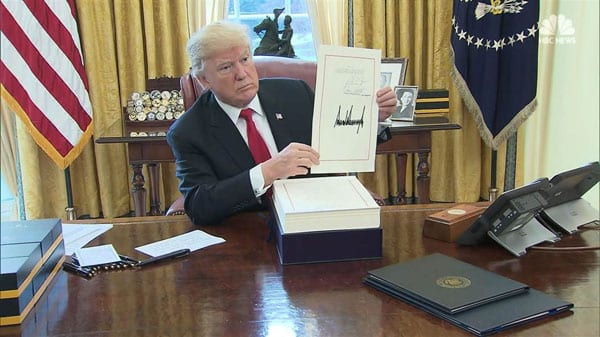 TPA President David Williams congratulated the President, saying, “This is a truly historic day for Americans across the country. President Trump campaigned on the promise of tax reform, and today he delivered on that promise. The new tax system lets more people keep their hard-earned money—allowing them to save for retirement or their children’s education. And, now that the Obamacare individual mandate is repealed, taxpayers no longer have to fear onerous penalties should they choose to forgo insurance. ”

Williams continued, “We are already seeing businesses small and large raise wages, give bonuses, and increase hiring, and it’s only been a few days since the tax bill passed Congress. Small businesses finally have the opportunity to expand, hire, and increase wages, after years of being suppressed by the government. TPA is pleased that Congress passed a plan that sharply curtails government while giving hard-working Americans more space to grow their enterprises.”

Williams concluded, “With a simpler tax code that is 31 years in the making, we will see the economy flourish. Due to the dedication of hundreds of lawmakers and taxpayer advocacy groups, the President was able to sign historic tax cuts into law. TPA understands there is much more work to be done, but we are grateful for these critical reforms.”