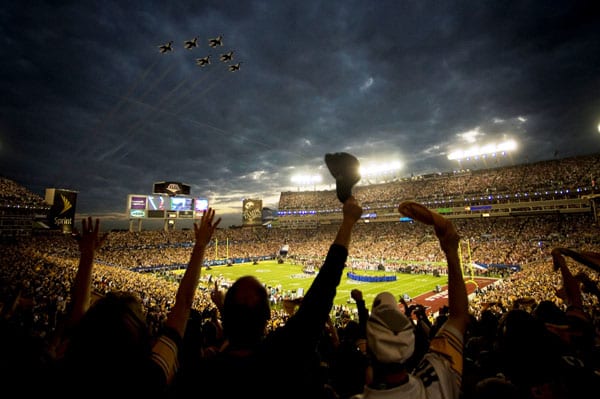 This article originally appeared in The Daily Caller on February 1, 2018

When Super Bowl LII takes place in the U.S. Bank Stadium in Minneapolis on Sunday, it will occur in the house that taxpayers built.

In an ever-growing race to offer more and more subsidies to owners of professional sports franchises – with the National Football League being the king – Minnesota taxpayers forked over nearly $500 million of the $1.1 billion cost to build the replacement for the Metrodome.

The amount of write-offs that are handed out to such teams are so outlandish that Minnesota has been eclipsed by three other NFL teams.

Las Vegas, the future home of the Raiders, leads the pack, guaranteeing $750 million in taxpayer money for the $1.9 billion Las Vegas Stadium, the most expensive of its kind. Indianapolis is second, with taxpayers paying the brunt of the costs — $619 million of $719 million total – for Lucas Oil Stadium. Atlanta comes in third, with taxpayers there funding $594 million of a $1.4 million project for the Mercedes-Benz Stadium that opened for play last fall, replacing the “ancient” 20-year-old Georgia Dome.

There is an extensive list of various NFL subsidies prepared by the Vikings as they prepared to seek  money for the new stadium. But, there is a long history of taxpayer subsidies. The Taxpayers Protection Alliance detailed those subsidies in a report, stating, “Sacking Taxpayers: How NFL Stadium Subsidies Waste Money and Fall Short on Their Promises of Economic Development.”

Lawmakers usually go to a few tried-and-true sources of revenue to fund the public portion – lodging taxes and car rental taxes. The logic is that many people who will use the stadium will be coming from out-of-town and tourists are a lot less likely to complain about the increased taxes than locals, making such taxes a safer play.

Minnesota took a different tactic, planning to fund the taxpayer portion with bingo and electronic pull tabs, but such gambling revenue fell short of projections and the state ended up using one-time funds from a cigarette tax.

One state lawmaker said Gov. Mark Dayton had pledged to put that cigarette-tax money into the general fund instead.

“If they were going to raise those taxes, then it’s money they were going to spend on schools and health care, but now they can’t because it will be dedicated to make [Vikings owner] Zygi [Wilf] richer for the next 30 years,” said Republican state Sen. Sean Nienow. “It’s absolutely general-fund money. It’s dedicated to pay off the stadium, and that means the governor lied.’’

According to Forbes, when Zygi Wilf and his brother, Mark Wilf, bought the Vikings for $600 million in 2005, the team was the least valuable team in the NFL. In the 2017 rankings, the Vikings had moved up to 18th with a value of $2.4 billion. The reason? The new shiny U.S. Bank Stadium.

In addition to taxpayers, it seems that even longtime season ticket holders also got the shaft. MinnPost recently detailed the story of Scott Lipets, whose family has held season tickets since 1964. His lower-row, midfield seats at the Metrodome turned into second deck seats in the gleaming new stadium.

Lipets told MinnPost that in choosing new seats, “I had assumed that 52 years of seniority would put me among the first.”

He was sadly mistaken. In addition to the lower-grade seating, Lipets got to cough up an additional annual price increase of $600 per ticket, as well as a one-time license fee of $3,500 per ticket.

On the other hand, six government appointees who negotiated the amount that taxpayers would have to spend to fund the stadium get free access to luxury boxes for any event held there, the Minneapolis Star-Tribune reported.

The Vikings are assumed to have made about $100 million selling seat licenses, though Moody’s said NFL teams keep their financial situations fairly private, therefore the exact amount is unknown. Combine that cash with an estimated $75 million in stadium naming rights and $200 million provided by the NFL and the team’s estimated cost for the stadium is just $225 million, or less than half of what taxpayers are paying out-of-pocket.

No matter who wins in the match-up of the Patriots and Eagles on Sunday, taxpayers will be the biggest loser.