Under proposed changes currently being circulated by Federal Communications Commission (FCC) Chairman Wheeler the E-rate program is set to expand nearly 123 percent from 2008 levels. The program, which provides funds to schools and libraries for telecommunications services, has been the target of reform for years due to its onerous requirements. Instead of streamlining the process and ensuring that the neediest schools receive assistance, the new plan merely expands the program without the overdue reforms.

E-rate is the name given to the one part of the Universal Service Fund (USF). The fund was set up in the wake of the 1996 Telecommunications Act and now has four major programs to promote access to various telecommunications services: a program for rural and high-cost areas; low income consumers; rural health care facilities; and schools and libraries. As consumers have moved away from landline telephone services and adopted wireless phones and broadband connections, the fund has come under financial pressures.

Funding caps were set on E-rate at $2.25 billion in 1997, but was not indexed for inflation until late 2010. Since then, inflation adjustments have shifted the cap to $2.4 billion. Although the Chairman claims that 60 percent of “$1.5 billion cap increase represents simply a ‘catch up’ of the lost inflation adjustment from 1997 to 2010,” the cap didn’t become an issue until 2010 because the fund never reached the threshold.

The table below charts the historical costs (in billions) and tells a more complete story: 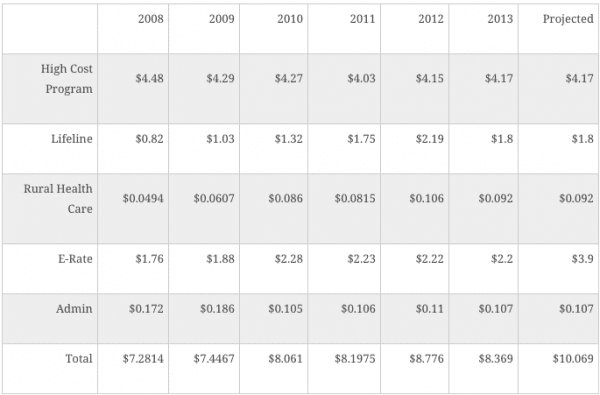 Even as recently as 2008, the E-rate program was just $1.76 billion. Because it has been in high demand, which includes significant outlays to some of the largest and wealthiest school districts in the US, the FCC estimated demand for E-rate at over $4 billion for 2014. Thus, it is safe to assume that the program would quickly expand to meet this unmet demand. The jump from 2008 to this plan is $2.14 billion – a 123 percent increase.

This chart shows the rise in the contribution rate over time: 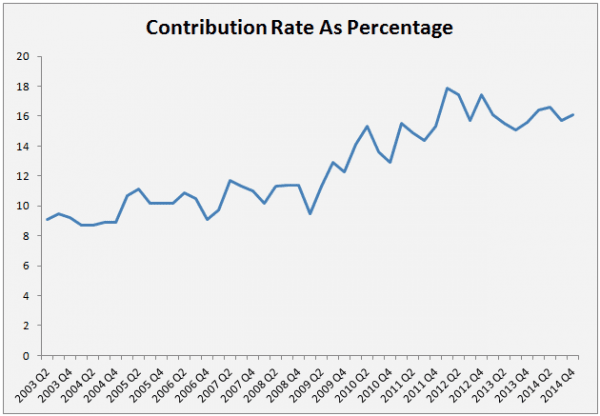 Assuming that the contribution base for the fourth quarter of 2014 holds and the rest of the program totals from 2013 carry over, consumers can expect the highest contribution rate yet, at 19.3 percent, a marked increased even from the first quarter of 2009 when it was just 9.5 percent.*

Changes made to the program earlier this year by the Commission have failed to address some of the most chronic problems, as both Commissioner Pai and Commissioner O’Riellyhave outlined in length. This new increase will only compound those problems.