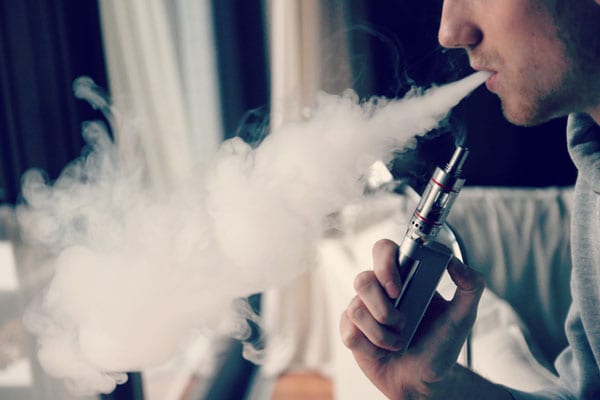 This week, the Food and Drug Administration announced that it was cracking down on the illegal sale of electronic cigarettes, namely JUUL, to minors across the country. Honest observers of this most recent move by the agency applauded the acknowledgment that the enforcement of current laws is the best way to promote public health. A contingent of Democrats and deranged activists, however, would like this to be the beginning of the end for an industry struggling to tell its side of the story.

In the April 24 press release , Commissioner Scott Gottlieb announced that the FDA would be moving forward with “a new Youth Tobacco Prevention Plan focused on stopping youth use of tobacco products, and in particular, e-cigarettes.”

The clearest component of this effort are nationwide undercover compliance checks to ensure that retail stores aren’t selling e-cigarettes to minors, which is currently prohibited. Gottlieb explained, “Today’s action should serve to put retailers on notice to stop selling products to minors.”

This announcement comes just a week after a collection of 11 U.S. senators, including Dick Durbin, D-Ill., Elizabeth Warren, D-Mass., Richard Blumenthal, D-Conn., and Tim Kaine, D-Va., called on JUUL to stop selling most of its products , accused the company of breaking the law by bringing new products to market, and demanded answers about the company’s position on a number of federal policy matters. A similar letter was sent to the FDA demanding that most vapor products be removed from the market.

In response to the FDA crackdown on sales to minors, Robert Gebelhoff of the Washington Post proclaimed , “Vaping advocates will likely respond to Gottlieb’s announcement with outrage.”

According to Juul Labs , the company “agrees with the FDA that illegal sales of our product to minors are unacceptable.”

Fontem Ventures, another company mentioned in the release, responded by saying, “We fully support and advocate for legislation prohibiting sales of vaping products to minors, and also respect the recent FDA enforcement action against retailers selling e-vapor products to minors.”

A statement from the Vapor Technology Association reads : “Today’s announcement by the FDA to address a central problem – enforcement of existing restrictions on youth access to vapor products – is a welcome step.”

American Vaping Association president Gregory Conley noted : “All things considered, Commissioner Gottlieb’s statement was measured, but the true test will be what the agency does on this subject going forward.”

That’s a far cry from outrage.

One reason, perhaps entirely unknown by Gebelhoff, is that the vapor industry has been at the forefront of the push for minor sales bans across the country, years before the FDA implemented a national ban in 2016. It wasn’t the evil vaping industry clamoring to sell their products to minors who stood in the way of public health’s campaign to clamp down on sales to minors. In fact, it was the opposite.

Because these big government activists demanded that the products be subject to astronomical excise taxes, as high as 100 percent, instead. If a minor sales ban had to be killed during the effort to impose supposedly more important laws like tax hikes, that was perfectly acceptable to many of these public health groups. I have witnessed these policy priorities firsthand in states like Michigan as part of Americans for Tax Reform’s continued campaigns to defeat new excise taxes on vapor products across the country since 2012.

These so-called public health organizations didn’t care about whether or not young people could legally buy e-cigarettes; they simply wanted the products to be so expensive that no one could afford them, even adults. Their most recent crusade isn’t about protecting youth, it’s about the outright prohibition of products known to be at least 95 percent less harmful than cigarettes.

It’s not the FDA’s crackdown on the illegal sale of e-cigarettes to minors that is met with outrage by the vaping community. It’s the continued misinformation campaign about the dangers of the products and the permanent harm to public health being done by those confusing smokers into believing e-cigarettes won’t eventually save their lives. That’s what’s outrageous.