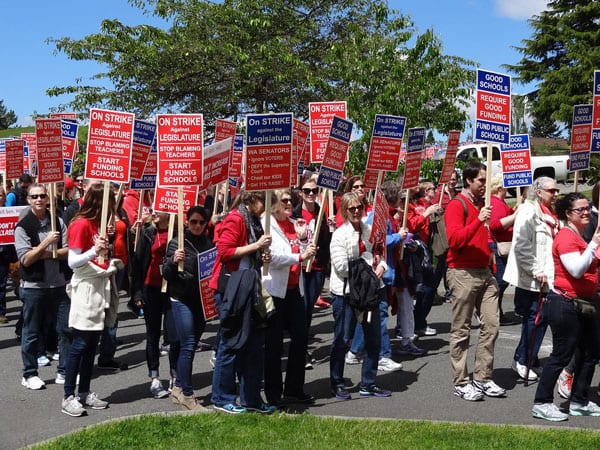 Big Labor is in all-out Armageddon mode, following a June 27 Supreme Court ruling (Janus v. AFSCME) allowing non-union public workers to opt out of union “fair-share” fees. In a 5-4 decision, the Court overturned the status quo, preventing “unconstitutional exactions [that result in] billions of dollars…taken from nonmembers and transferred to public-sector unions in violation of the First Amendment” in the words of Justice Alito. Proponents of “fair share” fees, however, worry that the ruling will open up a Pandora’s Box of freeriding and union-busting across the country. These fears fail to consider the wider impact of transitioning unions to a more robust “members-only” model instead of the current one-size-fits-all representation. Making public sector unions smaller and more responsive to the needs of members will lead to better representation for employees and lower costs for taxpayers.

To listen to the AFL-CIO, the recent Supreme Court decision empowers “corporate elites in their efforts to thwart the aspirations of millions of working people standing together for a better life.” This is not merely a wrong turn on policy, but rather “a political stain on what is intended to be the most honorable, independent body in the world.” These claims, however, betray a deep misunderstanding of public-sector unions’ role in America. Across the country, powerful public-sector unions are bleeding state and local coffers dry, extracting unreasonable concessions from politicians unable to counter their clout. In Illinois, ground zero of the recent legal battle, private-sector employees are forced to subsidize the higher pay and benefits of state workers affiliated with the American Federation of State, County and Municipal Employees (AFSCME) union. State union-affiliated workers only pay 8 percent of health-care costs out-of-pocket, making coverage platinum-level by the standards set by the Affordable Care Act. Furthermore, union members on the job for twenty years can look forward to completely state-paid insurance benefits in retirement. Attempts to phase-out this benefit and others are greeted with pushback and hostility by unions, complicating efforts to reduce Illinois’ gargantuan liabilities.

The issues facing Illinois have become a nationwide norm, amidst a growing gulf in public and private pay. Bureau of Labor Statistics economists Maury Gittleman and Brooks Pierce found in 2012 that, “controlling for skill differences and incorporating employer costs for benefits packages, … public sector workers in state government have compensation costs 3–10 percent greater than those for workers in the private sector, while in local government the gap is 10–19 percent.”

Enter aggrieved Illinois child support specialist Mark Janus, the plaintiff in the recently decided Janus v. AFSCME ruling. The state worker was perturbed to learn, “That I have to pay a fee to the union even though I’m not a member of the union, and I wasn’t asked for consent.” While Janus is “ecstatic” about the free-speech implications of the decision in his favor, the positives extend far beyond First Amendment protections. The inability of unions to collect dues from non-members means less general funds to push for ever-higher compensation. This eases the strain on the public sector, and pushes unions to revamp the way they represent workers.

Union leadership, for instance, often points out that without “fair share” fees, non-members would simply free-ride off of the perks of union representation. But as Heritage Foundation fellow James Sherk points out, nothing prevents unions from closing off representation to members only. Members-only unions across the country, including the Carolina Auto, Aerospace and Machine Workers Union and Texas Workers Alliance have won an array of concessions, including more lenient shift scheduling and inclement weather policies. The bargaining positions of these organizations are likely weakened overall, as the result of fragmentation and smaller war chests. But since these unions don’t have a monopoly on workers’ paychecks, they “must keep the membership engaged, educated, and active” according to The Century Foundation. This in turn makes them more likely to focus on issues of real concern to their rank-and-file, rather than fighting perpetual, ill-advised battles to sweeten compensation at taxpayers’ expense.

Union strength and vitality needn’t come at the expense of taxpayers and non-union state employees. Public workers can still get a seat at the table, with better representation to boot, without an extortionate forced-dues system. Janus v. AFSCME ensures that state and local obligations will remain under control, under a system that’s fairer to everyone.