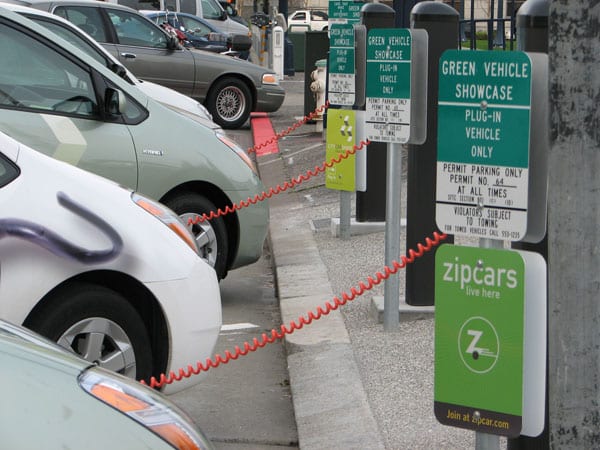 This article originally appeared in Economics21 on March 7, 2018

To listen to some environmental advocates, electric vehicles (EVs) are a panacea for America’s outdated, “dirty” transportation sector. After a decade of sluggish uptake by U.S. customers, a variety of organizations and businesses are making bold predictions about the future of EVs. Edison Electric Institute projects that U.S. EV penetration will reach 7 percent by 2025 and grow by leaps and bounds thereafter. A Bloomberg New Energy Finance report released last year finds that electric vehicles will comprise 15 percent of American cars by 2035.

How will governments and producers prepare for such an onslaught of electricity? Utilities and private players are jockeying for an advantage in the race to own and control charging stations on public infrastructure. Carefully-crafted ownership proposals can avoid taxpayer exposure, while ensuring that competitive pricing provides realistic signals for deployment.

EV backers have responded to tepid EV use by alleging a conspiracy by automakers and politicians to quash their prized product. Now, faced with an uptick in sales,“green” companies and organizations have taken their strategy in the complete opposite direction. Key industry figures such as Tesla founder Elon Musk have taken to hyping up their electric products, without much evidence of fantastic claims of impending mass deployment.

To gauge the effect of hype on Tesla’s bottom-line, analysts need not look further than the company’s price to sales ratio of over 4 (the lower the number the better ). Other automakers such as Ford, Honda, and Toyota have ratios considerably below 1, reflecting far lower prices investors typically pay for revenues generated. As Forbes contributor Howard Yu has previously pointed out, financial markets tend to react exuberantly to Tesla, despite shaky market fundamentals such as negative and worsening profit margins and frequently- missed production targets.

Musk’s cult of personality can win over investors and governments for Tesla. In particular, stunts such as the SpaceX launch of the Roadster into space reinforce the perception of Musk as a Starkian (Tony Stark from Marvel Comic’s Iron Man) visionary. Coupling a Tesla automobile with a SpaceX rocket reinforces the idea that the two companies may link up in the future. True or not, whispers of a merger allow investors to overlook Tesla’s flaws in buying stocks at high prices.

These investors, however, may not be around forever in the face of new competition from rival EV producers. Tax subsidies that were once a windfall for Tesla now stand to benefit more upstart competitors. The EV tax credit begins to phase out after 200,000 vehicles are produced by a manufacturer, a benchmark that Tesla has nearly crossed. Tesla hopes to overcome this impending disadvantage by partnering with local governments in putting charging stations on public land/infrastructure, and bamboozling taxpayers into paying for space and electricity costs.

Cities such as Norfolk, Virginia, receive free charging stations for public garages, while taxpayers are asked to fork over $1.50 per charge. Other cities reimburse Tesla for infrastructural costs related to charger construction and even incorporate charging stations into publicly funded building projects.

While the total scope of these benefits has yet to be quantified, deals specifically benefiting Tesla serve to insulate Musk from key competitors. In addition, special rules crafted by states will give private companies like Tesla an advantage over utilities.

In Arkansas, for instance, new rules embolden private companies to resell electricity without having to go through the regulatory process that applies to utilities. While states should be applauded for pursuing less regulation, creating a special set of rules for one potential owner and exempting rivals creates serious problems.

These new rules are intended to be narrow in scope, but may result in high taxpayer costs if players such as Tesla are able to hone the legislation to further their interests. Utilities are already having a more difficult time building out charging operations, as corporate competitors enjoy flexibility and subsidies. The Massachusetts Department of Public Utilities, for instance, approved Eversource Energy’s EV-centric infrastructure plans only on condition that infrastructure does not include the chargers themselves.

Over the next decades, the pace and form of EV expansion will depend largely on state and local policies. If private companies such as Tesla succeed in securing artificial advantages through image and force of personality, grid and road challenges may increase costs substantially for taxpayers. By refusing to pass special deals benefiting particular companies, governments can ensure that EV deployment is subject to competitive pricing and grows without taxpayer giveaways.