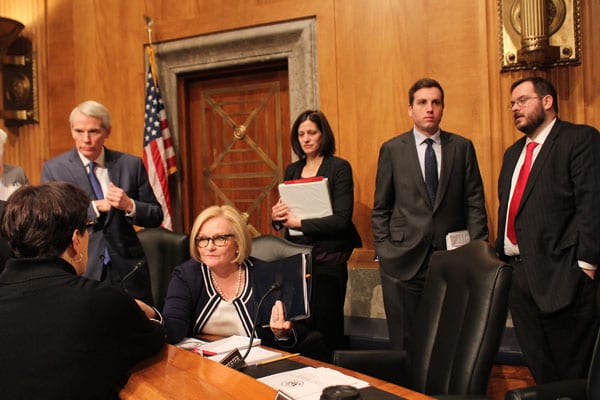 Sen. McCaskill is out of Touch With Missourians

According to Sen. Claire McCaskill’s (D-Mo.) campaign website, she’s just a small-town Missourian who “understands what matters most” to the people of the Show-Me state. She’s a “fighter Missourians can count on” and lists “cutting waste, fraud, and abuse” as one of her priorities.

Recent news reports, however, tell a different story. Since she’s been a U.S. Senator, businesses affiliated with McCaskill’s developer husband, Joseph Shepard, have received more than $131 million in federal subsidies. To be clear, Shepard is a housing developer who has invested in affordable housing projects for many years. The concern, as noted by the Kansas City Star, is “it appears that a growing percentage of Shepard’s personal earnings come from new businesses he has invested in that are receiving federal awards.”  The Star reports that since McCaskill entered the Senate, Shepard’s income from those projects increased from between $1,608 and $16,731in 2006 to between $365,374 and $1,118,158 in 2017.

Whether or not McCaskill had anything to do with her husband’s increased profits is not certain, but this latest example continues to show how out of touch she is with the average Missourian and raises some serious questions. Does McCaskill really understand what matters most to Missourians? Can she represent our interests in the Senate? And how can someone who has benefitted so richly from taxpayer-funded subsidies genuinely work to ensure her constituents’ tax dollars are protected from waste?

McCaskill lives a different lifestyle than the vast majority of her constituents.  McCaskill and Shepard’s reported net worth in 2017 – an amount more than $30 million – far exceeds that of the average Missourian. She and her husband enjoy a mansion in St. Louis, a Lake of the Ozarks vacation home, and a multi-million dollar D.C. condo.  Her well-known penchant for flying in a private plane, even while on a three day campaign RV tour, and her husband’s million dollar investment in a fund based in the Cayman Islands certainly don’t line up with the everyday life of small-town Missouri.

And don’t forget that despite personally enjoying federal subsidies and tax shelters, McCaskill voted against the federal tax cuts last year, which led to numerous companies passing along their savings and giving bonuses to hardworking Missourians. Ameren Missouri, Kansas City Power and Light, and Missouri American Water are all passing along savings to customers because of the tax cuts. Large companies and small businesses are offering bonuses to employees and increasing donations to charities. AT&T is giving over 8,200 employees $1,000 bonuses. Waste Management, Inc. is giving employees $2,000 bonuses.  The College of the Ozarks passed along $204 to every employee.  It’s hard to imagine one of Congress’ wealthiest members appreciating these bonuses, but regular, hardworking Missourians know exactly how meaningful even $200 or $1,000 can be to a family budget.

Claire McCaskill may have been born and raised in rural Missouri, but her actions and lifestyle show how far removed she’s become from her home state. Missourians can’t count on an out of touch elitist to represent their interests in the Senate. McCaskill is wrong for touting herself as a regular Missourian and she should be held accountable for failing to live up to her own campaign promises.

Gregg Keller is the Chairman of the Missouri Century Foundation.