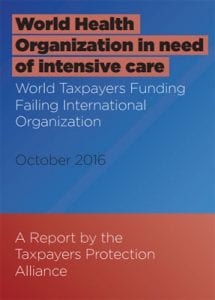 More than 6.5 billion taxpayers in 180 countries are being forced to contribute to the World Health Organization’s (WHO) Framework Convention on Tobacco Control (FCTC), the United Nations’ tobacco control agency. The WHO has been rebuked for banning journalists, malpractice, silencing stakeholders, and imposing onerous taxes and regulations on countries around the world

According to public documents, the agency is failing taxpayers around the world and harming its own effort to reduce tobacco use by operating in an offensive, reckless and financially wasteful manner.