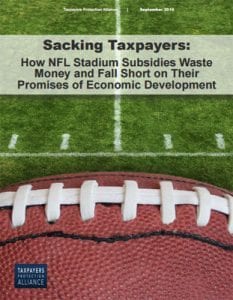 When the National Football League (NFL) season kicks off Thursday, the New England Patriots and Pittsburgh Steelers will battle in a stadium built using $72 million of taxpayers’ hard-earned money. Unfortunately, that’s nothing new.

Since 1995, a staggering 29 of the 31 stadiums that house NFL teams received public subsidies for construction, renovation or both. Between 1995 and today, taxpayers have been forced to spend nearly $7 billion subsidizing NFL stadium construction and renovation projects.

The subsidies amount to little more than crass corporate welfare. After all, the handouts for stadium construction and renovation projects amount to money being taken from struggling taxpayers by politicians, then funneled to the billionaire owners of the teams in order to reduce their overhead cost and increase their profits.