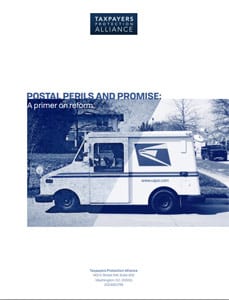 Postal Perils and Promise: A Primer on Reform

In this report, the Taxpayers Protection Alliance (TPA) identifies some of the largest cost drivers faced by the USPS, which lead to large annual losses despite the USPS’s approximate $3.7 billion in taxpayer subsidies identified in this report. Cost drivers include: