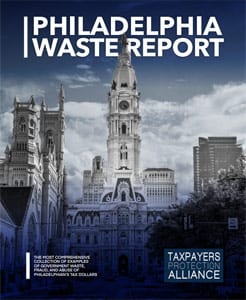 Philadelphia’s city government will spend a staggering $2,989 for every man, woman and child living in the City of Brotherly Love. 1

One and a half times higher than the median spent per citizen in the largest 100 cities throughout the United States.2

The problem is that this money is often used to fund wasteful endeavors with little oversight or accountability. The Philadelphia Waste Report highlights what amounts to rampant wasteful spending by city officials.

The information contained in this report results from an analysis of the city budget, audits, contracts, and grants, as well as interviews with policymakers and bureaucrats. The Taxpayers Protection Alliance has been able to produce a comprehensive collection of examples of government waste, fraud, and abuse of Philadelphians’ tax dollars.

In total, this report highlights $282 million in annual wasteful spending taking place in dozens of city programs and agencies. Philadelphia’s policymakers should either spend those hard-earned tax dollars more effectively or not spend them at all and return them to taxpayers in the form of tax cuts.

This report is intended as both an exposé informing taxpayers how poorly their local tax dollars are spent, and a guide for Philadelphia’s government officials looking for opportunities to trim waste in the city budget and reduce the burden of government on Philadelphia’s taxpayers.

Such a close look at the city’s spending habits is needed now more than ever. The City of Philadelphia is on a path to financial ruin. According to the city budget, during the 2019 fiscal year, which runs July 1, 2018 – June 30, 2019, the city will spend $108 million more than it brings in.3 As a result, city leaders are dipping into rainy day funds to keep the city afloat.