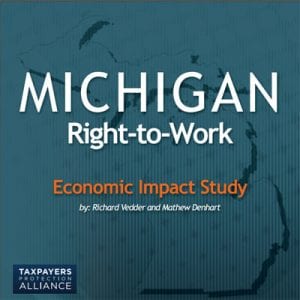 Over the past several decades, Michigan has had an extremely low rate of income growth compared with the nation, indeed the lowest rate amongst the 50 American states in the period from 1977 to 2011. The failure to adopt a “right-to-work” (RTW) law is one feature of Michigan’s economic environment that has significantly contributed to this economic sluggishness.

RTW laws, which have been enacted in 23 states, protect workers from compulsory union membership (or at least from compulsory payment of union dues) as a requirement of employment. States with RTW laws have generally been more prosperous, experiencing higher rates of economic growth. Moreover, people have moved in large numbers to RTW states, signaling that many perceive that these states offer a higher quality of life.