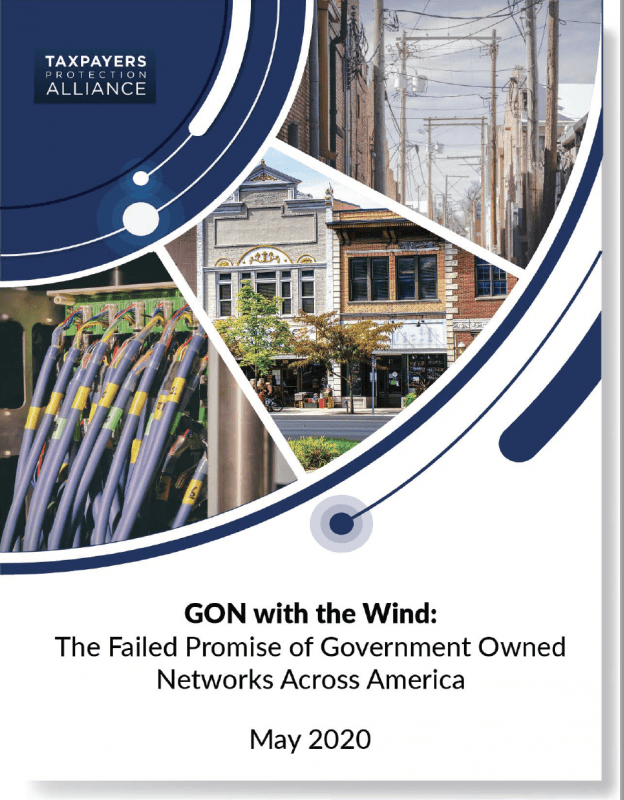 GON with the Wind: The Failed Promise of Government Owned Networks Across the Country

There is no disputing the importance of internet connectivity in the 21st century economy. The question is whether the private sector should continue taking the lead in funding and facilitating the deployment of broadband or whether taxpayers should create and fund/subsidize government-owned networks (GONs) to do so. Supporters of taxpayer-funded broadband systems claim that governments (i.e. taxpayers) are needed to build these systems because the private sector simply will not. The truth is that broadband providers have spent more than $1.6 trillion since 1996 to build, upgrade, and maintain networks, resulting in a 71 percent growth in rural broadband. Internet infrastructure is in place to serve 98 percent of the country, primarily built by telecom companies.1

This inconvenient truth, however, has not deterred attempts to use taxpayer dollars to fund broadband boondoggles.

Reminiscent of the Broadway hit The Music Man, telecom consultants ride into town and promise inexpensive networks that will attract thousands of customers. Some consultants even promise high take rates (percentage of subscribers to the service). A consultant, for example, estimated that Sun Prairie, Wisconsin could capture 30 percent of the market if it offered internet through Sun Prairie Utilities.2 But, the project only attracted about 5 percent of potential customers in its first few years and was sold to TDS Telecommunications Corp. in 2017.3

In 2015, consultancy CTC Technology and Energy prepared a “Feasibility Study” for the City of Seattle, Washington for a proposed taxpayer-funded fiber-to-the-premises (FTTP) enterprise.4 Unsurprisingly, the business produced optimistic take rates for this proposed project; CTC claimed, “the overall take rate the Broadband Utility might realize, based on survey projections, is approximately 41 percent.”5 Even if these projections were realistic, a take rate of 41 percent would still result in a negative cash balance after 10 years. The consultancy’s findings, however, were based on survey projections, despite actual consumer follow-through typically being less than initial survey estimates.

CTC admitted, “These numbers are likely to shift and change over time and may not always be as favorable as they are in our initial projections…Given the anticipated reaction from the competition, Broadband Utility take rates are likely to fluctuate, particularly downward.” These caveats are supported by the findings in this GON report, which estimates that average weighted take rates nationwide are below 40 percent. Furthermore, the consultancy noted that a “54 percent residential and a 27 percent business take rate” would be necessary for the Broadband Utility to generate cash flow in the communications space. Despite these projections and precarious reliance on survey estimates, the consultancy suggested that taxpayer-provided broadband services “could be sustainable in Seattle.”6

Uptown Services served as the consultant for the extremely troubled Salisbury, N.C. project, and even GON proponent Christopher Mitchell of the Institute for Local Self-Reliance noted the consultant has a poor track record of producing reliable take rate forecasts. As a result of Uptown Services’ lackluster record, its client networks “have encountered significant challenges in their business plans,” including Provo, Utah, and Alameda, California.7

In 2018, officials from the Tennessee Comptroller of the Treasury expressed concern with plans to build a government network in Johnson City, Tennessee, after consultant Magellan Advisors, a leader in the GON consulting field, estimated a 45 percent take rate. Comptrollers said the plan did not address the impact of market competition on pricing.8

The Taxpayers Protection Alliance (TPA) undertook this “broadband penetration” study for two primary reasons. First, TPA wants to provide a baseline of information regarding the actual number of broadband customers and associated broadband penetration rates for a large cross-section of GONs. This database includes 30 GONs of varying sizes spread across 18 states. TPA’s motivation is to eliminate some of the confusion and misrepresentations regarding the track record of various GONs with respect to their market penetration.

Second, TPA wants to provide community decision-makers who are considering investing in a GON with a tool to help them judge the reasonableness of the assumptions and credibility of any “feasibility study” that advocates for such an investment. This tool is a verifiable and reliable database of the actual performance of existing GONs with respect to the number of broadband customers and the scope of penetration.

To establish a verifiable track-record for each GON, a two-step process was utilized. The first step involved collecting data that GONs have reported in public documents. Sources included but were not limited to: annual financial reports (Comprehensive Annual Financial Reports— CAFRs); ongoing operating performance reports to bondholders;9 and annual filings with state electric and telecommunications utility boards. The second step involved sending a FOIA (Freedom of Information Act) request to each GON where additional information was needed to complete the database. FOIA requests were sent to 26 of the 30 GONs. The following GONs did not comply with the FOIA requests: Bristol, VA; Harlan, IA; Monmouth and Independence, OR; Lafayette, LA; and Spencer, IA.

Despite the unfortunate habit of policymakers ignoring the financial and viability problems posed by GONs, these taxpayer-funded networks may soon be on their way out thanks to the ever-changing technological landscape. As the United States continues deployment of 5G wireless services and cable companies lay more fiber that will bring faster service to customers without taxpayer subsidization, local officials may soon realize that GONs are an unnecessary and inefficient use of households’ hard-earned dollars.