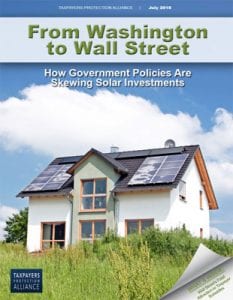 From Washington to Wall Street: How Government Policies are Skewing Solar Investments, July 2015

The 2007 – 2008 financial crisis left a sour taste for Wall Street in the mouths of many Americans. Policymakers and pundits chastised financial investors for being greedy and preying on Middle America. However, one does not have the scratch the surface too deeply to identify the real culprit of the financial bubble and fallout from its collapse: Washington.

Government policies, specifically those using taxpayer-provided money and taxpayer-backed loans, ignited the fire. Other government-imposed rules which incentivized banks to securitize mortgages that in a free market would have been undesirable (low quality and high risk), along with the government purchase of those mortgages, burned the house down.