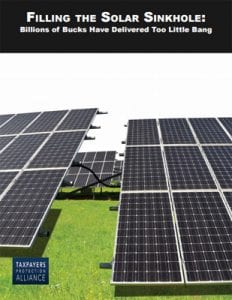 Filling the Solar Sinkhole: Billions of Bucks Have Delivered Too Little Bang, February 2015

In recent years, government has positioned solar energy as a potential solution to address both environmental concerns and the need for greater domestic energy independence. Billions of tax dollars have been spent on grants, tax breaks and other handouts to incentivize the solar energy industry. Efforts to spur solar power production and the widespread adoption of solar products, such as solar panels and solar-powered water heaters, however, have proven dramatically unproductive.

Despite massive government subsidies and untold numbers of programs to promote solar electricity, solar power is expected to make up just 0.6 percent of the total electricity generated in America in 2015, according to the Energy Information Administration. Worse, government efforts to promote solar energy have resulted in waste, fraud and abuse of billions in tax dollars and put even more of the public’s money unnecessarily at risk.