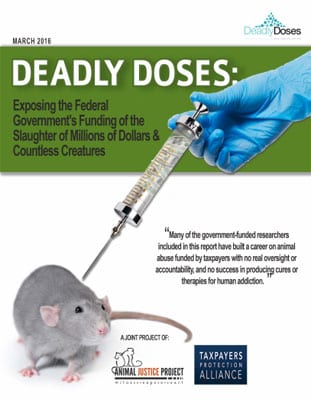 Deadly Doses: Exposing the Federal Government’s Funding of the Slaughter of Millions of Dollars and Countless Creatures, March 2016

In our second report, Animal Justice Project USA and the Taxpayers Protection Alliance have uncovered further examples of a shocking waste of taxpayer money used to addict animals to recreational drugs as part of the “Deadly Doses: A Legal Low” campaign.

The information discovered by investigating more than 95 experiments from 21 prestigious universities appears to belie the strategic plan released by the National Institutes of Health (NIH) at the end of 2015. The NIH plan, in response to a reduction in research funding, places a renewed focus on spending its limited resources wisely and effectively.

Examples of studies of the effects of recreational drugs on animals, including those featured in this report, certainly do not conform to the NIH’s new directive regarding responsible spending.