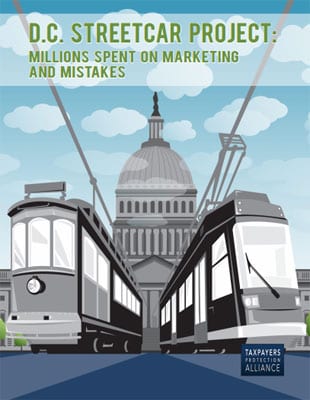 Washington D.C. residents and visitors have been told they will benefit greatly from the new streetcar system that remains under construction in the nation’s capital city. The District Department of Transportation (DDOT) claims the DC Streetcar, as it is officially titled, “will make travel within the District much easier for residents, workers and visitors, and it will complement the existing transit options.” DDOT claims that the multi-million dollar taxpayer-funded project is needed because the existing Metrorail and Metrobus does not have the necessary infrastructure to connect certain neighborhoods, according to DDOT officials.

Moreover, they insist the new streetcar system, which has been undergoing “testing” remains under construction without an official start date, could help to revitalize commercial corridors, lessen traffic congestion and alleviate pollution. At least those are the overarching objectives the project’s government boosters have identified in their public pronouncements. But right from the beginning, the project has been beset with financial difficulties that suggest taxpayers should not expect to see a tangible return on their investment anytime soon.