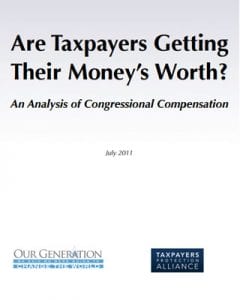 Are Taxpayers Getting Their Money’s Worth? An Analysis of Congressional Compensation, July 2011

Citizens across the country are struggling to make ends meet. They are frustrated with the failure of their elected representatives in Congress to address pressing national problems to make things better for all Americans. Compounding their frustration is the fact that Members of Congress receive pay and benefits far in excess of what average working Americans receive. In addition to a salary of $174,000 per year, which by itself puts Members of Congress among the highest-paid 5 percent of American workers, Members of Congress receive more generous fringe benefits than typical American employees. In fact, congressional compensation including benefits totals around $285,000 per year. In a time when unemployment rates are at unacceptably high levels and those who are working are often subject to “pay for performance” standards, it is galling to many to hear of the generous pay and benefits Congress has provided for itself. It is not surprising that Congress has such an abysmal approval rating.