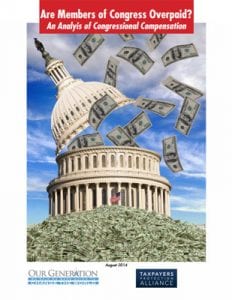 The country is $17.6 trillion in debt (and counting). Many pieces of legislation have gone unfinished including the annual spending bills that Congress has failed to pass for the last several years. In the midst of all of this financial and legislative disarray, Congress is on a five-week August recess and they are not slated to return until a week after Labor Day. When they do return, they are only expected to be in session for two weeks before heading home to campaign for re-election. Americans continue to be disappointed and disgusted with Congress. According to Gallup, “…with several key public opinion indicators as negative or nearly as negative as they have been in any recent midterm election year. This includes congressional job approval, which, at 16%, is on pace to be the lowest in a midterm election year since Gallup first measured it in 1974.”1 And, Congress is becoming increasingly out of touch. No one exemplifies this more than retiring Congressman Jim Moran (D-Va.), who told Roll Call that, “Members of Congress are underpaid.”