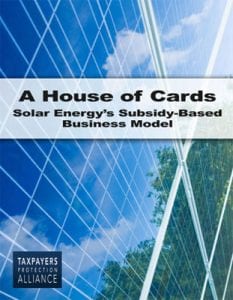 The renewable energy world was abuzz recently over news that the empty California office space once occupied by Solyndra, the most notorious of America’s green stimulus debacles, is now being leased by another rising star in the solar firmament, Elon Musk’s SolarCity. This was heralded in industry circles as long-sought redemption – as proof that Big Solar finally is emerging from Solyndra’s shadow.

“Solar is moving on” was the message dominating the Twittersphere as news of the move spread. But is solar moving on? Are Solyndra-like scandals, and the conditions and dynamics that cause them, really things of the past? Or are new Solyndras – the spawns of Solyndra – still out there, just waiting to have the plug pulled?