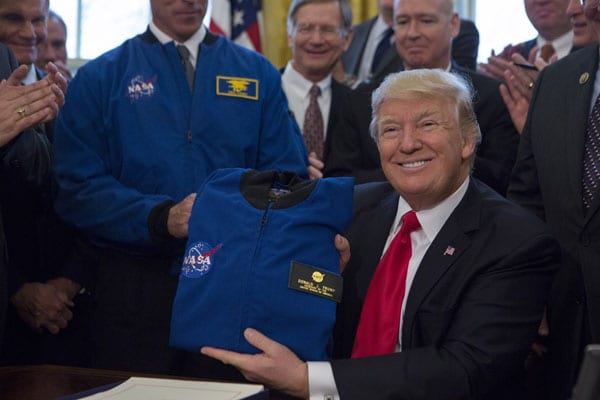 As President Trump marks his 100th day in office, commentators are already busy sizing up the leader’s legacy. The President’s short time in the Oval Office has been greeted with a constant stream of protests, cries for impeachment, and bouts of reflexive praise. Despite attempts to characterize the presidency in one word or phrase, the Mr. Trump’s performance has been wildly uneven. With a government shutdown looming around the same time as this milestone takes place, the stakes have become that much higher for the President to appear as though he is on or ahead of schedule with the laundry list of policy priorities he had coming into office.

To highlight the positives and underscore the need for further improvement, the Taxpayers Protection Alliance (TPA) has graded the chief executive on his approach to regulation, tax reform, and spending.

Regulation: B+
In an encouraging departure from his predecessor, President Trump has made the reduction of regulation a priority in his Administration. Shortly after taking office, he instituted a two-for-one rule requiring any agency proposing a new regulation to identify two rules for elimination. Various iterations of this rule have been successfully implemented in Canada and Great Britain, two countries with similar problems in economic stagnation and overregulation. And given the cumulative effects of regulatory buildup, a “spring cleaning” norm created by Trump’s executive order can unleash significant economic growth.

The President and Congress also targeted expensive, poorly designed rules such as the Bureau of Land Management ‘s BLM) methane rule. In addition to imposing large costs on small producers, the continued existence of the regulation would’ve meant more carbon-intensive methods of electricity production. Despite these encouraging steps, far more deregulation is needed to restore prosperity. The government currently relies on the the Congressional Review Act (CRA) to quickly curtail regulations created during President Obama’s last few months, but the “review period” is quickly coming to an end. Future liberalizations will require more substantive legislation and greater cooperation between the chief executive and legislators.

Tax Reform: B
Just this week the administration, after months of discussion, finally revealed their “principles” for tax reform. The outline given today by the White House is marked by lower rates, simplification, and reforms that will encourage greater business investment here at home. While the release of President Trump’s outline is a positive step forward, the legislative process has yet to unfold and key differences exist between the president’s plan and Speaker Ryan’s blueprint. The President has gone back-and-forth on the Speaker’s Border Adjustment Tax (BAT) scheme, which would shrink the economy and be a nightmare for customers.  There remains a great deal of work to be done on tax reform but this week the White House moved the ball forward and now they must work with Congress to keep the momentum going so that comprehensive tax reform can happen this year.

Spending F
In the area of spending, the Trump Administration fails to pass muster. The most glaring problem with the President’s record on spending is his plan to increase the Pentagon budget. TPA has been calling for spending reform at the Pentagon for years, and while President has made some inroads on the cost of F-35, adding to the Pentagon’s bloated budget is not a recipe for success. Repeated insistences to fund a large “public-private plan” for infrastructure still beg the question cost, which is key given soaring deficits. Additionally, the President has refused to back any spending bill without appropriations for a border wall estimated to cost over $20 billion. Details continue to be vague about construction, and officials won’t say for sure whether the construction will span the entire US border or just flatter terrain.

In other areas, moves by the chief executives indicate an unwillingness to confront the high-spending culture plaguing Washington, DC. A series of trips to Mar-a-Lago have pushed Trump’s first-year travel costs to near his predecessor’s total for all eight years. While the travel budget total is miniscule compared to the whole federal budget, setting an expectation of frugality must originate from the government’s chief executive. Tackling Washington’s “drunken sailor” mentality requires setting a personal example and pressuring lawmakers to cut back on unnecessary programs.

President Trump’s 100-day performance has been wildly uneven, with encouraging reforms typically followed by counterproductive noise-making.  If the White House wants to get serious about reforming spending, avoiding a government shutdown, and fixing the tax code, he will have to do better. President Trump has done a great job in many areas, including regulatory reform, agency reform, and his first choice for the Supreme Court. However, there remains many areas ripe for improvement. TPA will continue to hold the Administration’s feet to the fire, and criticize further kowtowing to the failed status-quo. Righting Washington’s path is no easy A, and will require a steady hand to root out the government’s culture of complacency.