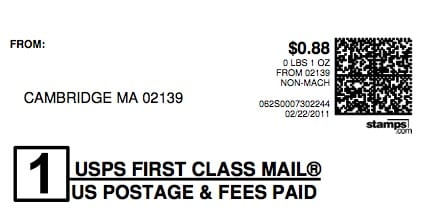 Taxpayers Win as the Postal Service Gives Stamps.com the Boot

This article originally appeared in the American Conservative on February 26, 2019.

The United States Postal Service (USPS) faces no shortage of issues, from billions of dollars in annual financial losses to declining consumer service marks. Fortunately, the beleaguered agency recently made a small change for the better, divorcing itself from a disastrous relationship with a prominent postage buyer and reseller—Stamps.com.

USPS pulled the plug after years of Stamps.com selling postage to small companies and organizations at unsustainably low rates. The USPS’s nixing of its deeply flawed “exclusive partnership” is no panacea, and the agency still has a long way to go in shoring up its finances. But by saying “no” to a terrible, lopsided agreement, the Postal Service has set a welcome precedent that other agencies could stand to follow.

To most trying to mail a letter, the price to be paid is listed at the local post office. That price, now set at 55 cents, has gone up an astonishing 10 percent since January 27. But a handful of companies have licenses to buy postage at far cheaper than advertised rates and resell them at a hefty markup (though still below market price). Until last week, the “reselling” market was dominated by Stamps.com, which had an understanding with the USPS that it would only offer these discounted rates to larger companies that could buy postage in bulk. That makes plenty of sense, and many companies made use of this strategy in order to entice new and large consumers, and keep said consumers away from the competition.

But Stamps.com did the exact opposite, offering small companies and organizations the same rates that larger companies were given. In 2017, the Capitol Forum used barcode scanning technology to decode the postage prices that Stamps.com was offering small postage buyers. They found that these companies were offered bottom-of-the-barrel prices by Stamps.com even after emphasizing how small their shipping volumes are. In some cases, these small businesses paid just $10.26 on a three pound parcel that should have cost $14.90, with Stamps.com and their software middlemen pocketing the difference.

If the businesses buying bargain postage were new USPS consumers to be wooed, Stamps.com’s tactics might have been understandable. But even without these shenanigans, most small companies and organizations pay far less at the post office than they would at any of the Postal Service’s private competitors. And instead of using low rates to bring new businesses into the USPS fold, resellers simply offered discounted rates to existing consumers in order to satisfy sales and volume requirements.

All of this duplication and unsustainable pricing meant that record profits accrued by Stamps.com resulted in record losses for the Postal Service. A recent report released by the Taxpayers Protection Alliance (TPA) found that the reselling program cost the agency at least $235 million per year in shipping irregularities and mispaid postage. But even this sweetheart deal wasn’t enough for Stamps.com. They then insisted that the Postal Service keep the cheap postage pipeline open and allow the company to work with other shippers. That led USPS officials to finally terminate the partnership.

As the bottom dropped out and Stamps.com’s share price value halved, the company’s management tried to style the divorce as a bold and exciting embrace of USPS’s shipping rivals. In fact, it was the Postal Service that had jettisoned the agreement, which for them had been all pain and no gain.

Unfortunately, the USPS still has a long way to go before it’s on firm fiscal footing. Even though the partnership is ended, the reselling program itself is not dead. Another company could leap into the fray and pick up where Stamps.com left off. But hopefully, saying no to one of the largest beneficiaries of a deeply flawed program will send a message throughout the federal government.

The Department of Defense, which is currently investigating a potential conflict of interest regarding a bloated, $10 billion cloud contract, could stand to learn a thing or two from the USPS. Setting these sorts of examples is useful in a government where competitive bidding is increasingly compromised by the rise of no-bid contracts. Even if fundamental reforms are a ways away, small steps still matter.