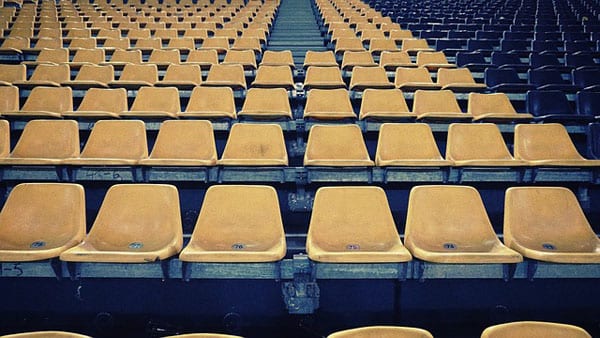 In Las Vegas, Maybe The NHL Doesn’t Have The Clout Of The NFL

This piece was published in the Spectator on September 7, 2017.

Walk past the water flowing over marble walls, cone-shaped sculptures and various eateries in The Park between the New York-New York and Monte Carlo casino hotels and you’ll reach T-Mobile Arena, which on a recent June day was preparing for a Queen and Adam Lambert concert, with Iron Maiden coming up in a matter of days. A variety of musical events and boxing matches were planned for the following months as the venue prepared for its main tenant, the expansion National Hockey League franchise Vegas Golden Knights, to open exhibition play in the facility on October10.

Not that AEG didn’t try — like just about all private developers these days — to secure public funding. The group initially worked with Harrah’s Entertainment (now Caesars Entertainment) nearly a decade ago to build an arena east of the Strip. But, Clark County commissioners balked at using public money to build another arena. There are already three privately owned arenas at Orleans, MGM Grand & Mandalay Bay, and the Thomas & Mack Center on the UNLV campus.e arena west of New York-New York for which T-Mobile bought the naming rights in January 2016.

As the NHL considered expansion, Bill Foley, leader of the Las Vegas ownership group, held a 2015 season ticket drive that attracted more than 13,000 pledges. This convinced the NHL, and commissioner Gary Bettman announced the city as the recipient of the newest NHL franchise on June 22, 2016.

Michael Schaus, communications director for the Nevada Policy Research Institute, said the way the NHL came to town “was perfect.”

“That’s kind of what you would hope would happen,” he said of recruiting professional sports franchises. “But the NFL over the years has gotten so used to getting states and cities to slobber over each other with incentives that it’s like they expect it now.”

The NFL also has the advantage of a football-mad populace. Walk around Las Vegas and you’ll see many more people wearing Raiders gear than clothing featuring the Golden Knights. A clerk at the gift shop at the Rio casino-hotel, which has displays of clothing for both teams, confirmed that the Raiders are better sellers.

“We’ve kind of opened up that floodgate with other business, as well,” Schaus said. “You look at the electric car manufacturer Tesla. When they decided they were going to build a new factory they started pitting the states against each other in Nevada and Texas, going back and forth trying to outbid each other basically, giving them a bigger incentive package. So you see it over and over, and I think the NFL learned that sooner than the rest of the economy did.”

Nevada is no stranger to taxpayer handouts. When Tesla was considering building its Gigafactory in Nevada, it initially asked the state to pay it $500 million in cash upfront, eventually “settling” for an incentives package worth $1.3 billion that was the largest in Nevada history. The Verge called it one of the 15 biggest tax breaks in American history.

In contrast, you have the T-Mobile project, which also included The Park, a $100 million pedestrian plaza that stretches to the front of T-Mobile Arena on Frank Sinatra Drive. The plaza adds to the aesthetics of the Strip between New York-New York and Monte Carlo at no cost to taxpayers.

Tables shaded by transplanted trees allow patrons to enjoy meals from such tenants as Beerhaus, Bruxie, and California Pizza Kitchen along the brick-lined path. By all accounts The Park has been a popular addition to the Strip since it opened in 2016, and it’s not hard to imagine an effort to build a similar entertainment complex near Las Vegas Stadium for its 2020 opening.

“What worked out nicely with The Park and T-Mobile arena was you had MGM and they wanted a better venue than some of the other casinos in the area anyway,” Schaus said. “So I think that regardless of if an NHL team came MGM was dedicated to building T-Mobile arena and the surrounding area. They kind of wanted this new, innovative idea on the Strip, and as it turned out, it worked really well with a private citizen that wanted an NHL team.”

He’s not convinced a similar effort would take place at the site of Las Vegas Stadium, noting the problems the site already has with finding enough parking for the planned footprint.