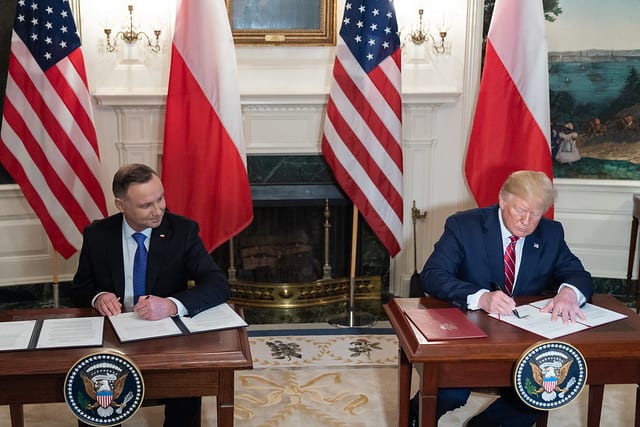 This article was originally published on Townhall.com on October 22, 2019.

In the 30 years since the Berlin Wall fell, America and Poland have never had a closer bond. Poland has morphed into a developed market economy, out of the shackles of a communist state. America trades vigorously with Poland, exporting more than $4 billion worth of goods each year to the seventh-largest economy in the European Union. If Poland continues to boom, opportunities abound for U.S. companies trying to gain a foothold in the resurgent country.

But, that’s a big if. To bask in prosperity and trade fairly with the U.S., Polska must give up misguided policies that fuel cronyism and rig the rules to benefit large, state-controlled businesses. Travesties such as the mining tax on copper and silver pose sizeable obstacles for U.S. businesses trying to invest in the country. The Polish-American friendship can further cement the country’s climb to prosperity, but only if Poland rejects misguided tax policies holding the nation back.

Poland does a brisk business exporting vehicle parts ($13.2 billion in 2017) and cars ($6.87 billion in 2017), earning Poland a reputation as Europe’s Detroit. But, unbeknownst to most of the world, the nation has larger copper and silver reserves than mineral powerhouses such as China and Congo. Despite having a safer, more stable system of property rights than China and Congo, Poland’s mining production lags far behind these developing countries. In 2018, for instance, Congo mined double the tonnage of copper that Poland did. China out-mined Poland fourfold.

The lack of extraction isn’t because of a lack of resources.  Companies must think twice before mining in Poland because of a hefty, poorly-designed tax on copper and silver production. Put in place in 2012, the nearly-90 percent “Tax on the Extraction of Certain Minerals” relies on a complicated formula based on the value of the minerals mined (not recovered), regardless of whether the miner makes a profit. For virtually any other good or service on the market, taxation only kicks in once the seller of the products has recovered its costs and earned a profit. This time-honored tax policy encourages start-ups to take production risks. And, even if said risks don’t translate into sales or profits, governments allow entrepreneurs to walk away from their ventures scot-free.  This policy fuels prudent risk-taking and eventually economic growth when companies are successful.

But in the Polish mining sector, copper and silver extraction operations need to pay the government money even if zero profits result from production. According to a 2019 report by Ernst & Young, these poorly thought-out tax policies are holding Poland back. The Ernst & Young analysts note, “production of mined copper in Poland relative to its documented reserves is low by international standards. An increase in copper extraction requires large capital expenditures and use of current technology to gain access to deeper copper deposits. Since the implementation of the mineral extraction tax (MET) copper exploration expenditures in Poland have been substantially reduced.”

This 2012 tax regime also holds back investment by creating a rigged system of protectionism. Indeed, the tax makes the building of new mines commercially impossible for new entrants. A handful of international players have tried, including U.S. mining companies, but the tax promptly blocked their progress and forced the businesses to look elsewhere. These skewed incentives overwhelmingly benefit the Polish state-controlled miner, KGHM, the largest and only extractor in Poland. By effectively keeping competition away, the fatally-flawed tax regime protects KGHM’s monopoly. Whilst KGHM has to pay the tax too, the policy has been cleverly and carefully designed to make sure that KGHM is the only mining company that can still continue to operate.

Fortunately, Polish policymakers can easily correct these problems and keep their country moving forward. And, by slashing mining tax rates and tying taxes to profits rather than extraction, the government can encourage much-needed new industry investment. U.S. policymakers can lend a helping hand, working with their Polish counterparts to craft reasonable taxation policies.

Poland’s 20-year growth stint needn’t be a one-off. With sensible policies, Poland can propel itself to higher living standards and keep itself open to U.S. businesses. Poland and America can keep their special bond strong, to the benefit of households and businesses in both nations.