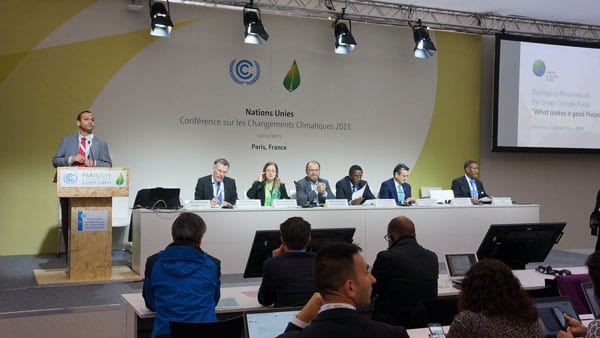 This article originally appeared in The Daily Caller on July 11, 2018.

Amid the prudent withdrawal of the United States from the Paris Accords last year, tempers flared and administration officials were harshly criticized by “green” advocates.

The “ignorant” and “uncaring” decision by the administration, though, proved a reasonable response to a flawed process that dealt inadequately with climate change issues. Recent developments within the U.N.’s energy policy apparatus have affirmed that U.S. disengagement was the proper approach.

Despite being heralded as the vanguard of the U.N.’s effort to fight climate change, the Green Climate Fund is rife with ineptitude and prioritization woes that ensure poor returns for taxpayers. The recent, continued failures of the Green Climate Fund demonstrate the need for the Trump Administration to continue withholding funds for the organization. Additionally, these failures should lead officials to question other “investments” into international governmental organizations (IGOs).

Bamsey’s resignation after only a year-and-a-half on the job offers a window into the Green Climate Fund’s lackluster progress. Over eight years, the Fund has committed nearly $4 billion to more than 75 projects across the globe, with far-flung initiatives ranging from solar penetration to energy efficiency. The lack of a clear focus led to a lack of a mission statement, as it struggled to recruit staff to build the organization.

The organization’s website paints a far more positive picture, pointing to the progress made in creating a cleaner future in countries such as Zambia, India, Syria and Vietnam. While the Green Climate Fund will gladly tout the funds devoted to these undertakings, they omit the implementation hurdles inevitable in working with these countries.

In Zambia, for instance, the attempt to build out solar capacity has been repeatedly delayed due to inadequate information by the government on which areas to develop. Zambia’s Industrial Development Corporation (IDC) appears to be heavily involved in construction efforts for the countries “green” infrastructure, despite rampant criminal activities at the IDC. Revelations emerged in February that high-ranking IDC members falsified legal papers and were involved in illegal syndicate activities across the globe. By funneling money through the IDC, the ambition of a “clean” future cannot be taken seriously.

Vietnam’s energy efficiency framework is a similarly-misguided venture by the Green Climate Fund. “Scaling Up Energy Efficiency for Industrial Enterprises in Vietnam” has racked up more than $80 million in funding from the Fund, in addition to $100 million in co-financing from the taxpayer-funded World Bank. The project, which is slated to run for 15 years, envisions that a “scaling up of energy efficiency investments in the country’s industrial sector will provide substantial mitigation impacts.” This recent funding award could not have come at a worse time, given Vietnam’s current struggles with corruption.

Executives in Vietnam’s energy, construction and banking sectors have been punished this year for embezzlement schemes, fraud and gross financial mismanagement. These allegations are hardly a surprise; Vietnam ranks 107th out of 180 countries in Transparency International’s Corruption Perceptions Index. Allowing hundreds of millions of dollars to accrue to some of the most corrupt conglomerates in the world in the name of vague “energy efficiency” goals is a tragic misuse of global taxpayer dollars.

Given the financial recklessness exhibited by the Green Climate Fund, the Trump administration was right to rescind the $3 billion promise to the organization offered by the previous administration. But that’s only a start; countless nations still contribute to an unnecessary organization without a mission. By holding the GCF to account for funneling billions of dollars to corrupt governments and organizations, governments across the globe can ensure that taxpayer money stays clean.