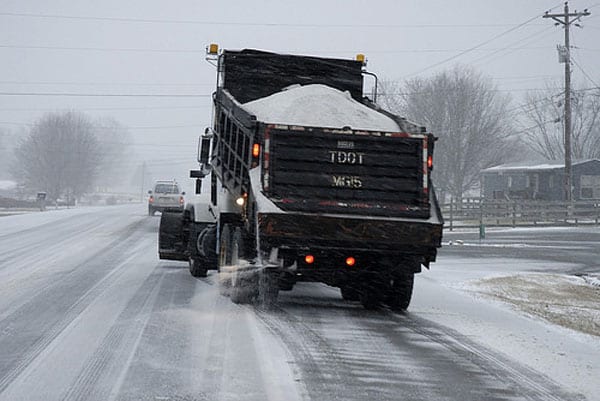 An issue for infrastructure reform: Too much road salt

This article originally appeared the Washington Examiner on January 29, 2018

Faced with budget shortfalls and a decreasing ability to raise revenue, state and local lawmakers are ever eager to divert “savings” to their favorite pet projects. But during cold and snowy snaps, officials have long realized that massive quantities of road salt can cut down on cleanup and emergency response costs.

This cheap solution, however, comes with quite a few additional problems. Road salt is increasingly being recognized as a detriment to human health, the environment, and infrastructure, as reports from federal and state agencies shed light on the mineral’s unintended consequences. Absent long-overdue reforms, local, state, and federal incentives undergirding the salting system will continue to cost taxpayers billions of dollars.

Beyond the frigid hamlets of northern Alaska and Minnesota, virtually all Americans know the sound of tires smooshing against salt. Silos storing the stuff, coupled with dozens and dozens of trucks, can readily be spotted beside thousands of roadways across most states. Most major cities devote millions of dollars per year to clearing roadways, and have had reasonable success over the past several decades. Pre-applying salt before an icy or snowy night can make the roads navigable again in short order, with minimal upfront cost to the taxpayer. At around $60 a ton, and around 20 million tons of salt applied to American roads per year, the price-tag comes out to less than $5 per vehicle.

Yet, these seductively low costs mask the corrosive costs of America’s favorite deicing agent. The salt causes extensive road damage, eating up asphalt and creating potholes. America’s roads and bridges pay the price for the millions of tons of salt put down every year, with around $5 billion worth of damage each year to highways alone. This corrosion also extends to vehicles, as repeated salt exposure causes cars, trucks, and buses to rust more rapidly. Resulting problems, such as subframe and braking system damage, add up to over $3 billion in damage per year according to AAA. Even non-drivers pay the price. Road salt regularly leaks into drinking water supplies, causing sodium levels several times the recommended amount for people with high blood pressure.

Road salt’s high costs don’t end with road corrosion and health degradation. Low procurement budgets are only possible because of the subsidies and favoritism showered onto mining companies by taxpayers at every level of government. Property tax abatements and industrial tax credits, for instance, fuel the operations of leading salt suppliers Morton and Cargill. Detroit Salt Company was able to circumvent Detroit’s anti-blight property restrictions by misleadingly claiming that purchased property would be used as greenspace. Expensive federal ice breaking efforts in the Great Lakes (relative to other regions) disproportionately benefit salt mining operations, which are heavily concentrated in Michigan and Ohio. Though no one has quantified the taxpayer dollars undergirding road salt supply, direct and indirect assistance amounts to billions of dollars.

Faced with this gargantuan toll, policymakers have few cost-effective options. Municipalities have resorted to exotic replacements like cheese brine and molasses to deice roads with fewer consequences. But these substitutes cost hundreds of dollars a ton, compared to just $60 a ton for salt, and carry unintended consequences of their own. Requirements for studded tires, as some Canadian cities have passed, result in even more tearing up of infrastructure.

But even if salt looks better than some of the alternatives, the high indirect costs associated with the mineral should be factored into decision-making costs. Lowell, Mass., for instance, was able to reduce its road salt by 30 percent over three years by simply implementing electronic spreader controls in lieu of regular snow plow truck operations. Municipalities will never have enough of an incentive to implement these measures, however, if government cronyism continues unabated.

State officials should take a good, long look at the subsidization of leading salt miners, as well as regulatory favoritism. Additionally, the Department of Agriculture can revamp their grant programs to discourage the acquisition of conventional snow plow fleets that contribute to the over-salting problem. Such a large effort would entail coordination between multiple levels of government, and displease the leaders of a multibillion dollar industry.

But infrastructure reform cannot be complete without changing the way that bridges and roads are deiced. By simply taking into account the indirect costs of road salt, policymakers could potentially save billions in repair costs and ensure healthier living for millions.