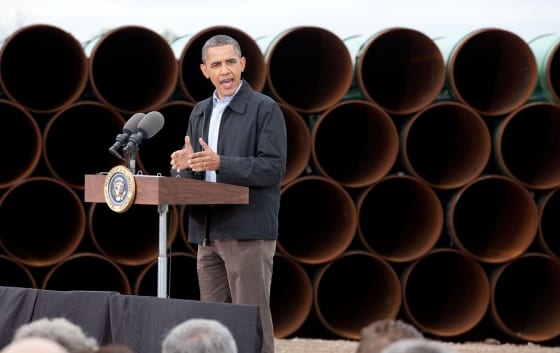 Last week’s announcement by President Obama that he would reject the Keystone XL Pipeline was not surprising, but nonetheless, it was a disappointing decision because of the economic and energy security benefits that will be lost.  The most troubling aspect of the decision is the reasoning behind the rejection. At a press conference, President Obama cited environmental concerns and an upcoming climate conference in Paris as major factors in his reasoning, despite findings that the pipeline would not significantly harm the environment.

Lost jobs and the economic growth that Keystone could have brought to the U.S. will be the most significant repercussions of the decision. It’s estimated that more than 42,000 direct, indirect and induced jobs would have been created through Keystone.  With an economy still reeling from the recession, those jobs are much needed by Americans who continue to struggle to find work.  It is also worth noting that $2.2 billion that would have been put into the pockets of those workers will be lost.  In addition to bringing jobs and wages, the project would have also contributed $3.4 billion to the U.S. gross domestic product (GDP).

The Keystone XL Pipeline would have also brought increased annual property tax revenue for local and state governments along its route, generating over $138 million.  It would have also created $585 million in new taxes for those same communities and over $5.2 billion in property taxes during Keystone’s lifetime.  There’s also the indirect economic impact of additional private sector investment of close to $20 billion that would have been generated on such things as food, lodging, fuel, vehicles and equipment.

The United States is now the world’s leading producer of oil and gas and we need to ensure our infrastructure capabilities are up to the challenge of keeping pace with a changing landscape in the energy sector.  The Keystone XL Pipeline would have provided some assurance.  In fact, the pipeline would have had the capacity to deliver 830,000 barrels of oil to Gulf refineries.

Additionally, by providing us energy from a friendly neighbor – Canada – the pipeline would have gone a long way towards reducing our dependence on hostile foreign nations, thus increasing our energy security. In a critical time as turmoil grips several parts of the world, it is paramount that the United States get closer to energy independence and the Keystone XL Pipeline would have been a positive step in that direction.

Not only did President Obama ignore the significant economic benefits and the strengthening the future of our nation’s energy security, he also ignored the overwhelming public – and bipartisan congressional – support for building the project.  In a poll conducted earlier this year, 57 percent of Americans supported construction of the pipeline.

President Obama had a rare opportunity to move forward with a project that enjoyed widespread public support and would have had a positive impact on several key elements of the economy.  Unfortunately, it appears that three weeks before the Paris climate talks, he has put politics above policy.  And in the end, it’s the American economy that will pay the price.