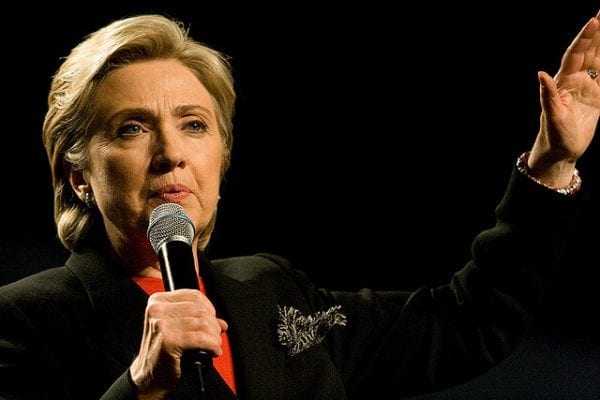 Hillary Clinton on Keystone: Late to the Party, and Absolutely Wrong

Showing herself to be a shrewd politician but a terrible judge of economic and energy policy, Democratic presidential candidate (and former Secretary of State) Hillary Clinton came out in opposition to the construction of the Keystone XL Pipeline this week. The move comes after years of dodging and silence on an issue that is critical to the nation’s economic outlook and overall energy strategy. The fact that Sec. Clinton waited this long, and then did so right during an historic U.S. visit by Pope Francis, shows that she’s well aware this decision is not only unpopular with much of the public, but that it is also bad policy.

The proposed construction of the pipeline provides the capacity to move more than 700,000 barrels of oil each day. The increased production would provide thousands of jobs and help lower energy costs for working families nationwide:

Job estimates related to the pipeline have varied from 6,000 to 20,000. TransCanada, the company building the proposed pipeline, estimates the Keystone XL project will support 9,000 U.S. jobs through early 2015. Regardless of the exact number, the pipeline will bring billions of dollars in economic activity and tax revenues to the U.S. economy.

Those figures should be reason enough for any logical person to support the pipeline. If Sec. Clinton is worried about the environmental impact, multiple reports (including a final report from the State Department in January of 2014) have concluded that the pipeline project spanning from Canada to the Gulf of Mexico would have little to no impact on the environment:

An Obama administration analysis of the Keystone XL pipeline said it probably wouldn’t alter the amount of oil ultimately removed from Canadian oil sands, boosting the pipeline’s backers by suggesting it would have little impact on climate change.

The calculation by Sec. Clinton appears to be more of a political move to placate the liberal wing of the Democratic Party as she runs for President.  Clinton joins her former employer and the man she’s looking to replace, President Obama, who is also opposed to pipeline. In February of this year, President Obama vetoed bipartisan legislation passed by the House and Senate that would authorize construction of the pipeline.  Obama’s veto (which was only the third of his tenure at the time) and Clinton’s newly minted opposition have come years after the project originally began.

The decision to oppose the construction of the Keystone Pipeline puts Secretary Clinton at odds with the vast majority of Americans who are in favor of the project. A poll from The Washington Post in late March of this year showed that the public favored Keystone 65%-22%. More recently, a poll released by the American Petroleum Institute just this month found a similar sentiment:

The telephone poll found that 68% of respondents unanimously support the building of Keystone XL. Also in the same poll 78% believe that Keystone XL would bolster economic security in the U.S. The agency also added that 66% are more likely to support a presidential candidate favoring the pipeline.

So, if the public supports the pipeline and it will help the economy without causing environmental damage, what could be the rationale for Hillary’s sudden decision to oppose the deal?  Phillip Bump of The Washington Post explains how this was mainly a political move for Clinton, focusing on how it’s a stance she could have years ago:

For months, Clinton has balked at saying how she feels about Keystone, which could easily be interpreted as not wanting to take a stand — and hoping the issue would go away before the election arrived. Given that a plurality of Americans oppose blocking the pipeline — being less concerned about climate effects and supporting the jobs it would create — opposing the pipeline might make a general election fight slightly harder. But that’s the lesson: Clinton is now willing to make her November case slightly more difficult if she can make her spring fight easier.

The bottom line is that the Obama Administration continues to stall on this issue and is delaying energy production that would benefit the American economy and move the country toward energy independence. TPA has always supported the pipeline and we believe a long-term project that will boost the economy, create jobs, and help to make energy more abundant and affordable will certainly benefit all taxpayers and consumers.