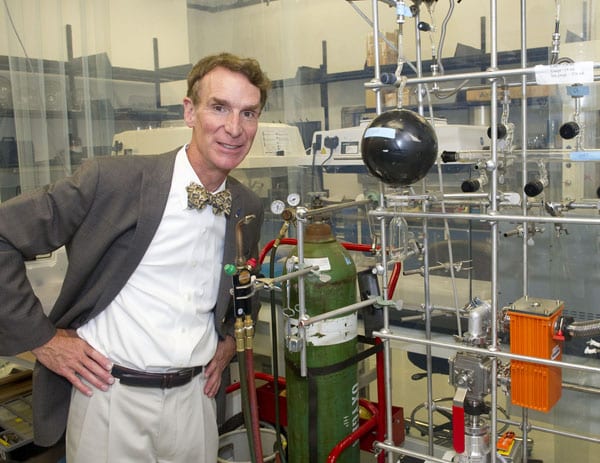 This article originally appeared in The Washington Examiner on May 9, 2017

Bill Nye’s new show on Netflix allows viewers to bask in all of the self-righteousness and goofy shouting that we missed from the 1990s. “Does the guy always shout this much?” asked an incredulous Redditor after seeing the Science Guy’s show for the first time. Such questions, which have proliferated around the Web in recent days, show a fundamental disconnect between the “I love science” crowd and the rest of us.

It’s not that I’m trying to be “anti-intellectual”; I find the scientific method useful in tackling life’s most pressing questions. But when propagandists such as Nye invoke “science” to the limited end of promoting dubious public policy, it’s important that taxpayers know the truth.

Take, for example, Nye’s years-long quest to promote renewable energy at any cost. When National Geographic reporter Simon Worrall asked the Science Guy about the potential downside of regulations “needed” to address climate change, Nye cited World War II-era price controls to argue that “we could do this again.” These simplistic calls to re-enact sweeping government controls over the economy go far beyond being “pro-science.” When Nye and others advocate for prosperity-eroding measures to tackle global warming, they are making a value judgment and marking it with the “science” stamp of approval.

But what if a warmer, richer world is better off than a cooler, poorer world?

Economists and scientists tell us that greater wealth comes with increased disease prevention capabilities, including the public health capacity to tackle malaria. Food and water security also decrease as countries get richer. Despite a surging global population, the number of undernourished individuals actually declined over the past 25 years, according to the World Bank. And thanks to economic growth, the global population is actually expected to plateau in 2050 before declining.

Richer countries tend to have lower fertility rates, with countries in the developed world churning out children below the rate of replacement. This byproduct of prosperity in turn has a positive impact on species protection, since population density is a top risk factor for extinction worldwide.

With this in mind, a step back is needed from the false, alarmist dichotomy presented by Nye and company.

Doing little in the face of global warming is not akin to laying down our arms to greet conquering Nazis. A wealthier world will be the key to ameliorating the economic and ecological miseries of the developing world, if we let development continue.

Unfortunately, “big steps” to end climate change such as the Paris Agreement will make it harder for countries in the developing world to power their futures with cheap fossil-fuel energies. International schemes that hoist onerous emission reduction requirements complicate matters for richer countries too.

Across the country, poor Americans are footing the bill for their richer neighbors’ trendy solar habits. Despite these regressive rules and regulations, the “pro-science” crowd claims victory as long as its narrow goal of carbon reduction is furthered.

More responsible policies would allow the renewable sector a fair shake at competition, in place of a system of favoritism. Picking energy winners and losers, in terms of both generation source and company, ensures that the best will not get on top. Taxpayer-subsidization of cost-prohibitive residential solar mutes the true advantage of utility solar, which is cost-competitive even without federal subsidies. Broad-based tax cuts can serve as a sensible alternative to the failed subsidy bonanza by letting energy companies compete on a more level playing field.

A better-off society across the board requires allowing companies to compete as a part of a general strategy to free up the economy. The world may well be a warmer place if Bill Nye doesn’t get his druthers. But it will also be a fairer and more prosperous place, where disease and pollution are kept to a minimum.