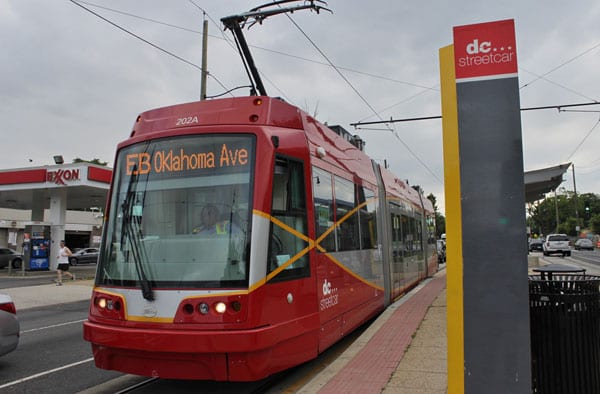 A Year After Opening, DC Streetcar is Just an Expensive Relic of the Past

This article originally appeared in The Washington Examiner on February 22, 2017

After a long series of delays and hundreds of millions of taxpayer dollars, the DC Streetcar finally began service one year ago this month. Since then, the District Department of Transportation has been advertising the 2.4-mile streetcar, which runs along H Street Northeast, as a free ride for passengers.

In reality, there’s nothing free about the service for any Washington resident. The city government spent more than $200 million in taxpayer money on a line that runs from behind Union Station to a point about halfway along Benning Road NE, where it connects with Oklahoma Avenue. This works out to more than $80 million per mile.

Keep in mind that city officials initially planned for a streetcar system ranging from 20 to 40 miles, with the first phase open for business in 2006. Since then, the project has been greatly altered and downsized from its original design down to the current paltry 2.4-mile system. DDOT hasn’t collected any money from passengers since services began in February 2016, but the agency says this “introductory period” will end at some point and ticket machines will be placed at each stop.

But, according to WAMU, “D.C. streetcar fares will remain free for at least four years as District transportation officials prepare to extend the initial 2.2-mile line along H Street/Benning Road NE east across the Anacostia River to the Benning Road Metrorail station in Ward 7.” Well, unless you’re a Washington taxpayer — then you’ll be paying for it. The WAMU story also noted that, “DDOT feared charging even $1 per ride would scare away passengers.”

So how is the streetcar doing?

DDOT compiled monthly data that shows streetcar ridership exceeded its expectations with “well over 400,000 passengers” in the first six months of service, according to a press release. But residents and business owners who were interviewed by The Washington Times in August gave mostly negative reviews.

Those sources told the paper the streetcar has been involved in several accidents and is frequently responsible for causing traffic jams. They also said it is typically faster to simply walk, use Uber or take a bus to where they want to go along the H Street corridor. The buses, for instance, come one right after the other while the wait time between streetcars is about 15 minutes.

Uber services present a unique challenge for streetcars given how nimble and agile the online transportation network is to use for anyone with a smartphone. Even as new Sunday services got underway for the DC Streetcar last fall, it appears to be losing customers to Uber, The Washington Post reported.

Despite all the money that has been spent so far on the installation and marketing of the streetcars, DDOT doubled-down last year on a $221,000 ad campaign to lure new customers. A portion of this amount has been spent on radio ads, but it’s not clear how much. If the number of streetcar passengers has exceeded the expectations of city officials, why do they feel motivated to spend hundreds of thousands of additional dollars on public relations? Especially considering that DDOT has spent a substantial sum on promotional efforts already.

In a report last year titled, “D.C. STREETCAR PROJECT: Millions Spent on Marketing and Mistakes,” the Taxpayers Protection Alliance identified more than $2 million in costs that were devoted to marketing, public relations and communications efforts that were spent before the streetcars were up and running. TPA submitted a Freedom of Information Act request to DDOT requesting all expenditures related to the streetcar project between Jan. 1, 2011 and July 27, 2015. Specifically asking “for expenditures related to any marketing materials, as well as any print, Internet, radio or television advertising, used for marketing or educational purposes for the DC Streetcar.”

A 2012 invoice shows a project cost of $174,456.95 for the website. Included in the costs are “website content development, webfonts and templates punchlist items.” Spending $174,000 on a website is excessive, unnecessary, and doesn’t help the streetcar carry one passenger. Upon reviewing the site, professional website developers told TPA the website should cost, at most, $30,000 to build.

Another example of the profligacy includes a 2013 invoice that points to $528,442 in “communications and media” expenses on a form titled, “Indirect Costs Detailed Sheet.” That same 2013 FOIA record includes a document entitled “1.7 Communications,” which identifies project managers, project assistants, project coordinators, and communication strategists that rack up more than $89,396.53 in total costs.

But wait, there’s more! Apparently, all those expenses weren’t enough for DDOT, since it felt compelled to begin a new ad campaign last year.

Will the Streetcar ever charge passengers or pay back the $200 million? Time will tell. When services began last February, it was the first time since Jan. 28, 1962 that streetcar services were offered in the city. Spending even more taxpayer money on marketing and slick communications cannot obscure the fact that cumbersome, slow streetcars are a relic of the past and are ill-suited to meet modern transportation needs.