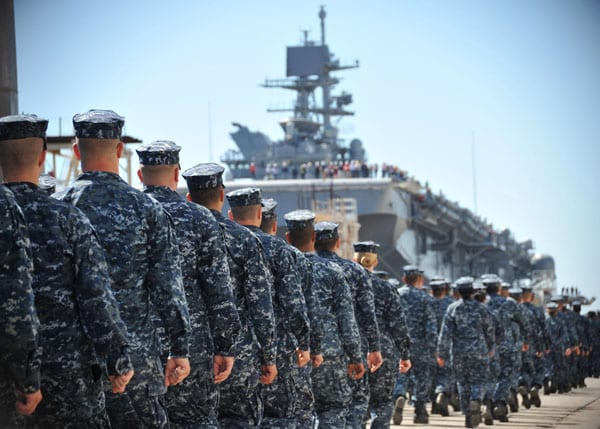 The Navy Wants $1.5 Billion in Additional Goodies. We Want an Audit.

This article originally appeared in The American Conservative on March 14, 2018

As the recent spending debate in Congress made clear, the Pentagon isn’t exactly starved for cash. The latest budget agreement, reached by lawmakers back in February, blew the lid off of Budget Control Act spending caps, increasing funds to the Pentagon by 15 percent over the next two years.

Of the requested $686 billion for the Department of Defense, $194 billion is slated for the Department of the Navy. In fact, the 2019 Navy budget is an astounding 18 percent higher than the 2017 levels, despite diminishing conflicts around the globe. Why a peacetime Navy demands a budget fit for the Cold War and Iraq War is a mystery. Even reliable defense hawks have begun questioning Navy spending in recent years.

Yet even those plentiful appropriations haven’t been enough to satisfy top brass at America’s maritime military. Shortly after the budget agreement passed, the Navy submitted an “unfunded priorities list” to Congress, providing “opportunities to further accelerate readiness recovery and increase lethality should additional funding become available.” All told, the suggested additional appropriations topped $1.5 billion. Contrary to the assertions espoused in the letter, those funding items would only bog down the Pentagon with waste, the last thing the taxpayers need at a time of government bloat and record debt.

Part of the challenge in analyzing defense spending is the massive knowledge gap that exists between military planners and ordinary citizens. Pentagon appropriators insist that large investments are necessary to confront emerging global threats, so who are we to question whether the Navy needs upwards of 60 anti-ship cruise missiles, another 58 air-to-air missiles, and five new torpedoes? Meanwhile, research and development (R&D) costs can be slippery, too, and typically go unchallenged. Chief of Naval Operations Admiral John Richardson has identified more than $250 million in unfunded R&D priorities, including more than $95 million for cybersecurity defense.

That money would go towards a broad array of cybersecurity items, ranging from workforce readiness and data collection to platform system development. While the case for more cyber capabilities at the Pentagon seems like common sense, more dollars doesn’t necessarily equal more quality. In recent years, despite more than $72 billion appropriated to the Defense Department for cyber-related programs since 2010, the DoD Office of the Inspector General (OIG) and the Government Accountability Office (GAO) found Pentagon leadership to be woefully inconsistent in implementing needed cybersecurity measures. This has no doubt led to embarrassing hacks and intrusions, including a August 2015 seizure of the Joint Chiefs of Staff email system by Russian hackers.

And within the Pentagon, the Navy has been no shining star in cybersecurity management. An April 2016 report from OIG found that the “Navy did not perform all software assurance for the Navy Littoral Combat Ship,” which is supposed to operate close to shore to counter shallow-water mine, surface, and submarine threats. Critical software helping to power the LCS wasn’t fully secured and examined, leaving open the possibility of cyber disruption by hostile powers. These findings, coupled with the abysmal cybersecurity grade earned by the Pentagon on the Federal Information Technology Acquisition Reform Act’s latest scorecard, should give pause to appropriators eager to fork over even more dollars to the Navy for cybersecurity development.

Yet even if these capabilities could be successfully realized, AI warfare is hardly a panacea. The fear that military deployment of lethal AI would open a Pandora’s Box has led leading technology specialists to oppose its deployment—particularly “killer robots”—by defense agencies. While these experts shouldn’t have the final word, such weighty questions about autonomous warfare deserve more debate before a blank check is written to underwrite it.

The Navy’s “unfunded priorities list” offers us a microcosm of U.S. military spending. Year after year, the Pentagon’s budget expands without proper scrutiny of funded programs, many of which get bogged down with mismanagement. Other items, meanwhile, may well prove too effective, making for deadlier conflicts and creating dangerous precedents for the future.

Until the nearly $1 billion audit of the Pentagon—the very first—is complete and open to public examination, it is only prudent to regard with caution “unfunded priorities” that come up after a budget agreement is signed. This wish list would raise the Navy’s funding ceiling even further skyward. Our goal should be keeping things down to earth.