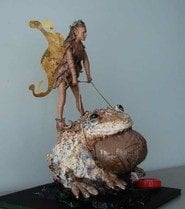 Taxpayers on the Hook for Unnecessary Art Spending

Let me start out by saying that this blog posting is NOT an April Fool’s joke.  According to U.S. News and World Report, “A $600,000 frog sculpture that lights up, gurgles ‘sounds of nature’ and carries a 10-foot fairy girl on its back could soon be greeting Defense Department employees who plan to start working at the $700 million Mark Center in Alexandria, Va. this fall.”  While a final decision has not been made yet, the frog sculpture is one of the finalists for the center.

Ironically, the Mark Center is supposed to serve as a hub for defense workers who were relocated as part the cost saving measure of the Base Realignment and Closure (BRAC) Commission.

Although there was initial discussion about including art work at the new center, some thought the idea had been shelved, including Don Buch, a member of the BRAC Advisory Group.  According to U.S. News and World Report, “Buch says he’s not opposed to art, just high-priced works that won’t be seen by many. He estimates that only 2,500 will see the artwork every day as they use the bus transfer station at the Mark Center. ‘Who the heck is going to see it,’ he asked. ‘To spend six hundred grand to amuse the same people every day is nuts.’”

The news doesn’t get any better if the frog sculpture loses.  According to ARTINFO, if the frog loses, “That leaves a sculpture and wall-piece by Linda DePalma based on the form of the Virginia Magnolia; an abstract mural based on the patterns of sound waves, by Heidi Lippman; and a “functional artistic bench” from Deirdre Saunder.”

Government spending should be prioritized and certainly a gurgling frog statue or a mural based on sound waves is nowhere near the top of anybody’s list of priorities, especially the Department of Defense.