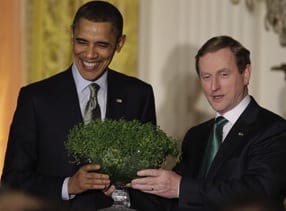 The annual celebration of one of the most famous Saints is nearing, and along with the festivities that many will enjoy, there is much to celebrate about the land that gives us the greenest of yearly holidays, St. Patrick’s Day! Ireland is to be commended for their foresight to encourage commerce and business through free-market principles, and it shows with each company that makes a move to do business in the land of Saints and Scholars.  Unfortunately, for all the pro-business, pro-consumer, pro-taxpayer aspects of Ireland and their system of commerce, there is something brewing that may be cause for holding off on the weekend festivities. There appears to be a movement toward adopting an anti-business, anti-consumer, and anti-free market tactic known as ‘plain packaging’; and TPA is gravely concerned and deeply disappointed with this development.

The impact felt by the United States business community at large by plain packaging is particularly important considering the timely visit to the US by the leader of the Irish government that began Thursday. Taoiseach Enda Kenny (Ireland’s Prime Minister) arrived yesterday and plans to meet with the President, Vice-President, and Congress thru the weekend. The trip is focused on several issues, including Ireland’s reinvigorating economic outlook:

The Taoiseach’s central focus during his US visit will be to highlight the very significant progress made towards Ireland’s economic recovery over the past year including exiting the EU/IMF Programme of Support, successful return to the bond markets and improved job creation. He will emphasise Ireland’s strengths as a location for foreign direct investment and overseas visitors, and promote Irish companies as a source of high quality products and services. On Thursday, the Taoiseach will have a number of economic engagements in Washington, and will also address the American-Ireland Fund.

Earlier this year, TPA reached out to Taoiseach Kenny and the Irish government, sending a letter urging the nation not to adopt plain packaging regulations:

It is in this context that we wish to raise a note of concern regarding proposals in Ireland which would impose “plain packaging” requirements on tobacco products, thereby limiting the ability of companies to market their products under legal and legitimate global brand names. Such a move would indicate an underlying lack of appreciation for intellectual property rights that could have a chilling effect as other IP dependent companies consider investment decisions in Ireland.

Last month, the group representing solicitors in Ireland voiced their opposition about a possible move on plain packing by the Irish government. The group discussed the harm on intellectual property rights, and also echoed a concern that reflects some of what has happened in Australia regarding illegal activity related to tobacco ‘plain packing’ initiatives:

The body representing solicitors says it is opposed to moves to introduce plain packing for cigarettes, arguing it would have a damaging effect on areas such as intellectual property rights.

The Law Society also predicted it could potentially lead to court challenges as well as a possible rise in smuggling.

The consequences that ‘plain packaging’ would have is not limited to Ireland; it reaches across oceans into the United States and could reach further. The letter that TPA sent to the Irish government touches upon both the hindrance to investment and negative consequences on trade that these initiatives would likely have if adopted and the business community is watching closely. The United States Chamber of Commerce weighed in, raising concerns itself this past January:

The notion that the Irish government is contemplating measures that would destroy any industry’s legitimate and legally sanctioned trademark protection and branding causes concern in the U.S. business community that extends into many different sectors of our membership. We believe that protecting intellectual property (IP) rights and advancing public health are fully compatible, and by pursuing this course a false and damaging choice is being presented. Furthermore, the Irish government is sending a troubling signal to the many different sectors of the business community that depend on IP and branding as vital to their ability to drive economic growth and create jobs.

Ireland should look to Australia as to why plain packaging is such a bad idea.  In 2012, Australia enacted policy that “prevents tobacco advertising and promotion of tobacco products and tobacco product packaging by making it an offence to sell, supply, purchase, package or manufacture tobacco products or packaging for retail sale that are not compliant with plain packaging requirements.” The verdict after one year of these new restrictive and unconstructive initiative was seen in (pardon the pun) plain view: studies showed little to no impact on deterring tobacco use, loss of revenue at the cost of taxpayers, and an increase in black market product.

The fact that the nation in the world with one of the most friendly business environments, that includes a corporate tax rate that far outpaces the United States in terms of encouraging investment, would move toward such a commerce-hostile policy is almost unthinkable. That being said, there is a real threat here and TPA is taking it seriously to ensure that all individuals in Ireland will take a careful look at the consequences of enacting such a law.

Ireland has enjoyed a great deal of positive economic growth and it is most certainly due to the business-friendly policies they have adopted, most notably tax policy at the corporate level. Unfortunately, any move that results in  ‘plain packaging’ would do great damage to the partnerships the nation has built with business interests internationally, who have been more than eager to invest. The Irish government would be wise to celebrate their St. Patrick’s Day weekend remembering that policies which stifle creativity and attempt to engineer behavior can only negatively impact businesses and consumers; and in the end harming taxpayers. There’s no pot of gold at the end of a ‘plain packaging’ rainbow, there’s only economic harm.