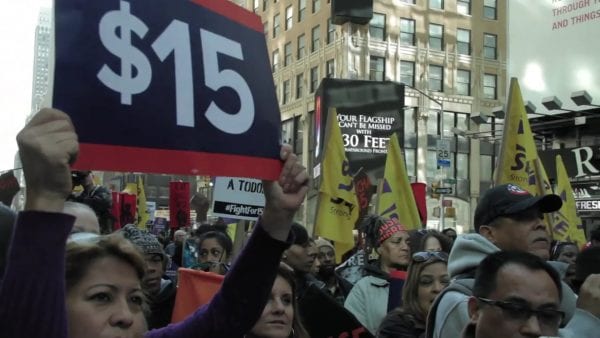 This article originally appeared in Townhall.com on May 18, 2016

It’s a well-established fact that drastic minimum wage hikes are a job killer. The Congressional Budget Office (CBO) admits it and leading economists have warned against it. But unfortunately, that hasn’t stopped liberal states like New York and California and the national “Fight for $15” movement from advocating for a $15 minimum wage – to the detriment of low-wage workers and small business owners. Government shouldn’t be dictating wages, the free market should.

This shouldn’t be a hard concept to grasp. Raising everyone’s wages might seem like a great thing for politicians to throw around during elections, or unions to argue for to pad their membership rolls, but these policies distort the free market and wind up doing more harm than good. It is basic economics: when you increase the cost of inputs like labor, less of it will be demanded. And in today’s technology-driven, innovative environment, industry can and will adapt – away from human labor.

Unnecessary government actions have equal and opposite reactions. For example, last week, popular national fast-food chain Wendy’s announced they would be transitioning their front of the house fast food workers to automated self-service kiosks in reaction to California and New York’s passage of a $15 minimum wage. That’s 6,000-plus restaurants across the country that will likely be laying off workers and cutting its workforce by as much as half. McDonald’s, too, has been testing its own version of electronic ordering, and it surely won’t be long until they and other chains follow suit.

On a recent earnings call, Wendy’s President Todd Penegor acknowledged that the shift to automated ordering was in response to the new laws and that franchises in both states have begun raising their prices to offset the sharp increase in wages. This is what happens when government tries to manipulate the market – they end up making the situation worse. Unfortunately, low-skilled workers, those most likely to be on the bottom end of the income scale, will be hurt the most by the decisions of elitist, progressive activists in California and New York to arbitrarily raise wages.

The data is clear – these policies are a bad idea. A study published last year by Texas A&M Applied Microeconomics Professor Jonathan Meer and Massachusetts Institute of Technology (MIT) postdoctoral research associate Jeremy West demonstrated that the minimum wage reduces job growth and that “industries that tend to have a higher concentration of low-wage jobs show more deleterious effects on job growth from higher minimum wages.”

And a robust study spanning decades of minimum-wage research by the Federal Reserve Board’s William Wascher and University of California Irvine professor David Neumark bears this out. They write in their book, “Minimum Wages” that for each 10 percent minimum wage increase, there’s a 1-2 percent reduction for teenage or very low-skill employment – and just think, the California and New York wage increases top 50 percent!

American Action Forum, the free market think tank, has estimated that when California’s $15 minimum wage takes full effect in 2022, at least 700,000 jobs will be lost. In New York, they estimate a loss of between 200,000 and 588,000 jobs, depending on the model used. In neighboring New Jersey, where the state legislature is considering raising their minimum wage to $15, the National Federation of Independent Business estimates a loss of 70,000 jobs over the next 10 years. The impacts of these laws are real and sizeable.

As the cost for labor rises thanks to progressive government mandates, expect companies to follow in Wendy’s footsteps and adapt in ways that end up hurting workers and driving up prices. You might think “fighting for $15” is good policy today, but recognize that in the long run, the final price of these policies are going to cost a whole lot more than a catchy tagline.