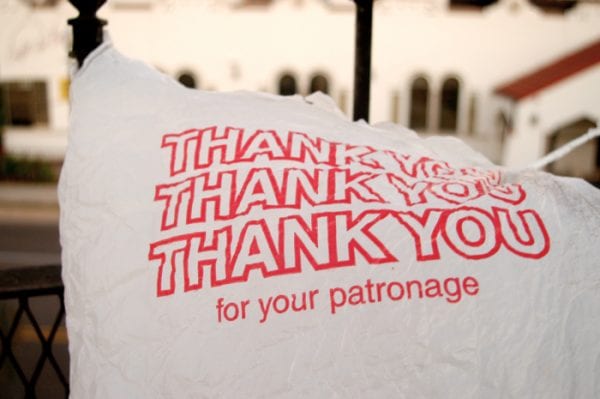 This article appeared in The Washington Examiner on May 18, 2015

Two neighboring states with similar environmental challenges are forging wholly distinct approaches to the old supermarket question: “Paper or plastic?” One state government bought into junk science and suspect emotional appeals about plastic bags, while the second did what’s best for the environment and economy.

You might be surprised to learn which is which.

In California last year, Gov. Jerry Brown green-lighted a first-in-the-nation statewide ban on lightweight plastic bags and a dime-a-bag fee on paper bags. But directly to the east, Arizona Gov. Doug Ducey signed a ban on municipal bans of plastic grocery totes into law last month. (Missouri, too, got in on the pre-emption act this month when its legislature also stripped cities of the regulatory ability to ban bags.)

Soon, California voters will have an opportunity to bring the two states into alignment by overturning the plastic bag ban in a ballot referendum.

When Gov. Brown approved the legislation last September, opponents moved quickly to gather the half a million signatures necessary to put the ban question directly to voters in a 2016 general election referendum.

The nanny state-environmentalist complex misled the public about the nature of the plastic ban and paper tax. Lawmakers wooed lobbyists and Big Business with the promise that grocers could pocket the dime-a-bag excise fee for paper totes. That single allowance is estimated to earn the grocers a dizzying $1 billion in new revenue, according to economic forecasts.

But the grocers’ payday won’t charm the working single mother whose already-stretched food budget will take a hit as she shoulders the state’s newest fee.

And junk science reports about the environmental impact of fully recyclable bags won’t convince fair-minded voters when honest academics tell them that bag bans and taxes have no discernible impact on the amount of litter generated; that bag bans and taxes don’t affect the amount of plastic in our oceans; and that alternatives to plastic bags in fact have a considerably greater lifecycle carbon footprint.

Without financial incentives to grease the way, previous attempts to ban plastic bags statewide in California were unsuccessful.

In fact, California’s deal was brokered only when the bill’s crafters carved out the provision allowing grocers to retain all the fees for paper bags. When economists said they expected all those dimes to add up to $1 billion in new revenue, suddenly the grocers became vocal proponents of banning plastic bags.

When voters go to the polls, they will have an opportunity to save 2,000 local manufacturing jobs that could dry up simply because government deems an industry distasteful. They will also have a chance to tell legislators that government shouldn’t be picking winners and losers in business, denying consumers the ability to choose the products that best meet their needs.

If paper bags were superior in strength, cost, convenience and carbon output, they would win out in the marketplace. That’s how America works — at least, that’s how it’s supposed to work.

By voting the ban down, California taxpayers would save hundreds of thousands in tax dollars that would be spent on administrative costs associated with implementing and enforcing the ban — to say nothing of the money they’ll save from not having to pay bag fees each time they visit the grocery store.

New regulations always come with added layers of bureaucracy and more red tape. Just how much? In California, the Legislative Analyst’s Office predicts that more than $700,000 would be needed for administrative positions to implement the ban from 2015-18.

The beauty of the referendum system is that Californians will be empowered to make their governor and legislature finally listen. Of course, it would have been far simpler if they had followed Arizona’s and Missouri’s example and listened from the outset.