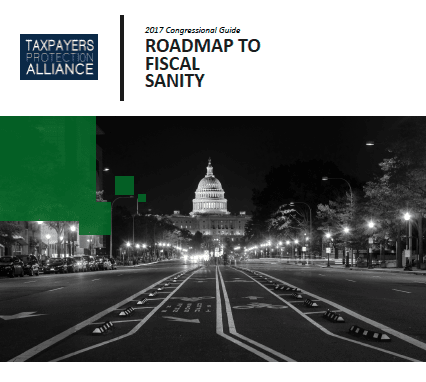 The Taxpayers Protection Alliance (TPA) released a series of issue briefs for the 115th Congress titled Roadmap to Fiscal Sanity.  The publication puts forward an aggressive reform agenda for Congress.

TPA President David Williams said of the release, “The newly elected Congress has No More Excuses for not acting on real and meaningful reform when it comes to reducing spending and getting the debt under control. TPA’s Roadmap to Fiscal Sanity provides a path forward.” Williams also said the report shows why taxpayers are so frustrated with Washington, “The problems we identify in this brief are areas where TPA has been working on reform for years and while Congress has made many promises, they have failed to deliver. Our report can help make those promises a reality which will benefit all taxpayers and working families.”

Williams concluded by urging lawmakers to take the report and the concerns of taxpayers seriously, “It’s clear from the 2016 election results that taxpayers are fed up with Washington. They’ve been ignoring the concerns of the American people for far too long and that has to change. The Roadmap to Fiscal Sanity is a way for Congress to not only take those concerns more seriously, but also a way to finally put forward meaningful solutions that will get the country back on a positive economic track, while reducing the massive debt that the nation continues to accumulate.”