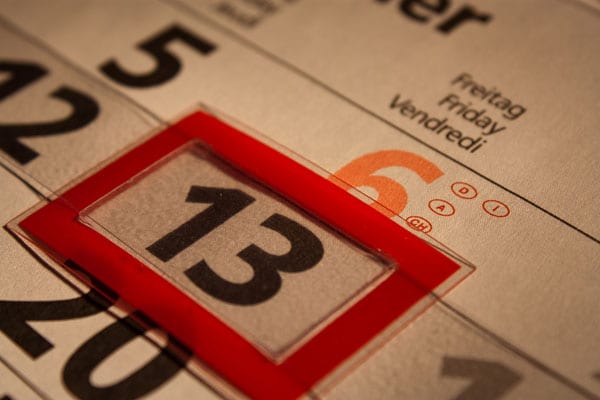 Thirteen Proposals from the CBO for Deficit Reduction

Friday the 13th is a holiday of morbid unintended consequences. Like indoor umbrella openers or mirror breakers, most members of Congress are oblivious of the negative effects stemming from their actions. But, unlike superstitions that rarely have a cause and effect, the action (or inaction) by Congress has dire fiscal consequences.  Spending initiatives such as health-care subsidies and loan guarantees are well-meaning, but balloon the deficit and harm intended beneficiaries. But this grim reality comes with a silver lining. By eliminating many programs in the federal budget, Congress can simultaneously restore solvency and increase prosperity.

In honor of this Friday the 13th, we chose 13 fiscal actions that would result in ten-year budgetary savings of nearly $300 billion over five years and  $1.1 trillion over ten years if taken together. Our selections are far from exhaustive, and our non-triskaidekaphobic readers should feel free to send us their own lists.

1. Reduce the Size of the Federal Workforce Through Attrition

The size of the federal workforce has climbed 10-15% since the advent of the Great Society programs in the 1960s, and has shown little change over the past twenty years. An ambitious reform agenda to block grant federal programs to the states, however, can result in less federal meddling and smaller required staffs. As Congress devolves federal functions to the states, lawmakers should work to reduce federal hiring.

As we’ve seen time and time again, international organizations such as the United Nations waste billions in taxpayer dollars every year. Hard-earned dollars go toward dubious activities such as the Framework Convention on Tobacco Control (FCTC) and multi-year lawsuits against innocent journalists. As the UN oil-for-food scandal has shown, the UN is better at strengthening autocracies than enabling an effective global order.

From the Synfuel failures forty years ago, to Solyndra-style projects today, federal subsidization of “renewable” energy technologies has been ill-fated. As the Washington Post has detailed, political considerations have been at the forefront of decisions to fund projects. Federal legislation to reduce onerous tariffs on Chinese solar panels and allow real estate investment trust (REIT) financing for new projects could unleash the same technologies without taxpayer dollars.

The SNAP program has experienced significant mission-creep over the past decade, subsidizing able-bodied adults without dependents and families over the poverty line. Several states, including California and Illinois, have retained federal waivers allowing able-bodied recipients to continue receiving benefits without engaging in “work-related activities.” Simply requiring that these individuals search for employment would reduce costs and allow knock-on savings for other welfare programs.

While most pension plans in the private sector have shifted toward “defined contribution” schemes where workers invest their earnings, the government promises employees large predetermined pension payouts. Moving toward less guarantees and more worker flexibility is fairer to both public employees and taxpayers subsidizing their retirement. Additionally, research has shown that public employees tend to be compensated more highly than their private-sector counterparts, even after adjusting for education and skills. Reducing pay adjustments and lowering pension amounts would level the playing field and taper off brain drain from the private sector.

A federal effort to make college education available for low-income students has morphed into a bonanza for middle-and-upper class attendees. In particular, forgiveness of graduate student debt enriches a wealthy segment of the population. Research shows that universities respond to aid increases at both the undergraduate and graduate level by raising tuition and/or cutting back on their own aid programs.

A handful of large agribusinesses are responsible for the majority of farming output in America, and benefit tremendously from continued crop insurance and farm subsidies. These federal handouts tend to make unhealthy food inputs artificially cheap, and contribute to the obesity epidemic plaguing America. Subsidies also give wealthy domestic farmers and unfair upper hand over poorer tillers in other countries.

American infrastructure costs are among the highest in the world, due in part to a dysfunctional labor system. Davis-Protection “protections” result in above-market payment for construction workers on public works projects, and delays stemming from required wage surveys. Highway projects are also subject to substantial mission-creep, in which unnecessary additions cause significant budget overruns. Repealing Davis-Bacon and limiting funding to revenues would make routine tasks such as repairing broken roads and bridges considerably cheaper for the taxpayer.

While federal spending on Medicaid has skyrocketed in recent decades, there is little evidence that greater expenditure has improved outcomes. Federal payments often vary drastically by hospitals that produce similar success rates for patients. The open-ended subsidies provided by Medicaid have allowed providers to set sky-high prices for products and procedures, inflating medical bills across the country.